Published by
José Gabriel Navarro,
Nov 17, 2022
When it comes to pay TV in Brazil, the signal remains strong even in the face of signs of weakening. The Portuguese-speaking country ranks among the largest pay TV markets in Latin America, only second to Mexico. Following a decade marked by the rise of video streaming worldwide, the segment has shrunk, but the pace of the decline is projected to subdue throughout the 2020s. According to forecasts, between 2019 and 2022, pay TV revenue in Brazil will have fallen nine percent to 3.15 billion U.S. dollars. Between 2022 and 2025, however, the figure would decrease by around four percent. The industry also keeps a leading position within the realm of telecommunication services in Brazil. In the second quarter of 2022, pay TV's net operational revenue amounted to four billion Brazilian reals, more than mobile telephony and fixed-broadband internet combined.

Reinvention in times of TV everywhere

Despite the segment's resilience, online video seems to be its ultimate challenger. Ignoring computers and mobile devices and considering only televisions, in mid-2020, video streaming and pay TV in Brazil had an audience share of approximately 14 percent each. About a year and a half later, more than 18 percent of TV sets in use in the South American country showed content streamed from platforms such as YouTube, Netflix, and Disney+, while pay TV's share stood below 12 percent. The business model, perhaps unsurprisingly, meets Brazilian viewers' pressing demand for audiovisual content on all their devices. On the other hand, video streaming also faces limitations. More than one-fourth of consumers surveyed in Brazil in 2021 said affording all platforms they wanted was too expensive, and one out of three interviewees said they used alternative websites and apps to watch paid content for free. On a local level, the medium might change, but the mediascape remains the same. Brazil's largest pay TV content provider – Grupo Globo – also runs the country's leading domestic subscription video-on-demand (SVOD) platform, Globoplay.

Pay TV's user base bounces back

Whereas the segment's financial results have been declining, the number of subscriptions in the sixth-largest country by population expanded. The pay TV household penetration rate in Brazil reached 23.6 percent in the last quarter of 2021, the highest share in three years. In absolute terms, forecasts also indicate growth. The number of pay TV subscribers in Brazil was projected to go from 14 million in 2022 to 14.3 million four years later. And a specific part of the country might be home to most of the potential new customers. The number of pay TV subscriptions in Brazil's Northeast region increased by 72 percent in just two years, surpassing three million at the end of 2021 – the highest figure in at least a decade.

In the following 5 chapters, you will quickly find the 29 most important statistics relating to "Pay TV in Brazil". 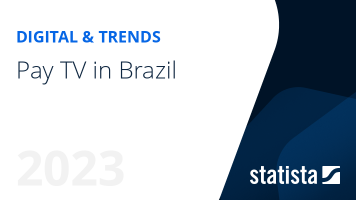 The most important key figures provide you with a compact summary of the topic of "Pay TV in Brazil" and take you straight to the corresponding statistics.