Meanwhile, feelings of anger, frustration and disbelief have mounted in Congress, while a furious privacy debate has erupted across the United States. The latest national survey conducted by the Pew Research Center and The Washington Post regarding the government’s collection of phone and email data has yielded interesting results.

Conducted during the period June 6-9 among 1,004 adults, the survey has revealed that public opinion has not been adversely affected by last week’s turn of events. The sacrifice of personal privacy to combat terrorism is viewed as an acceptable tactic by the majority of Americans.

However, when personal privacy is broken down into two distinct branches, notably email and phone monitoring, a 52 percent majority considered NSA monitoring of the former unacceptable, while a 56 percent majority believed phone-tapping was acceptable when it came to preventing terrorism.

However, it must be pointed out that the 41 percent minority rejecting phone monitoring is very substantial indeed. Internet monitoring is of greater concern to Americans than phone surveillance, with a more even divide. Even though 52 percent voted ‘no’ to government monitoring of email accounts, a substantial minority of 45 percent considered this tactic an acceptable way of combating terrorism. 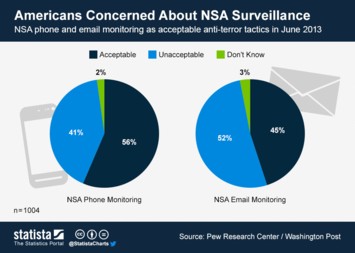