88.9k
Over the past two decades, the internet has not only brought us funny memes, cat videos and an unfiltered view into the mind of the U.S. president, it has also enabled millions of creative people to market their craft and make an income. Essentially the world’s largest marketplace, the internet with platforms such as Etsy, YouTube and Instagram has given creatives around the world an outlet for whatever it is they’re creating, be it art, music, photographs or anything else.

No longer confined to local markets, anyone with a creative talent has the chance to make money online and, as a recent report [PDF] by re:create, an interest group advocating the rights of creators, shows, millions of Americans take that chance. Re:create estimates that nearly 15 million creatives across the U.S. have generated more than $5 billion in collective earnings across eight online platforms in 2016 alone.

As our chart illustrates, YouTube is a particularly lucrative platform for independent content creators, with 1.8 million Americans earning a total of $3.2 billion on Google’s video platform in 2016. Etsy, a market place for handcrafted goods, comes in a distant second with $1.4 billion in collective earnings, while Instagram rounds of the top 3 with $538 million in earned revenue. 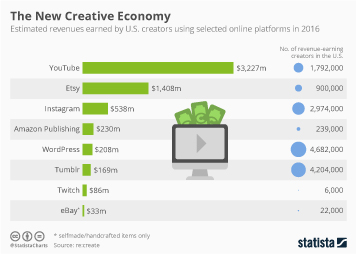 This chart shows how much money U.S. creatives earned on selected online platforms in 2016.

Etsy Amid the COVID-19 Pandemic