Published by Statista Research Department, May 9, 2022
Etsy is an online marketplace that works as an intermediary between customers and artists, crafters of handmade items, or collectors of vintage products. Founded in June 2005, the company’s website Etsy.com was launched in Brooklyn, New York, at a high point for internet startups and new design trends focused on artisanal and vintage objects. The company engages in customer-to-customer (C2C) or peer-to-peer (P2P) e-commerce in which both the seller and the buyer are private individuals or micro-businesses. This is in contrast to other forms of internet commerce such as B2C (business to customer) or B2B (business to business).

The marketplace for artists

Products sold and bought through Etsy range from art, clothing, jewelry, and other decorative objects to arts and crafts supplies. The platform registered almost immediate success, reaching up to a million in sales within a couple of years after its founding. The annual gross merchandise sales volume has been on a steady increase, rising from less than 200,000 U.S. dollars in 2005 to almost five billion in 2019. Yet it was in 2020, the first year of the pandemic, that the company's finances really took off. The platform's parent company, Etsy Inc., generated revenues of around 1.7 billion U.S. dollars that year. This growth has only continued in 2021, reaching 2.3 billion.

In 2021, the number of active sellers on the Etsy.com platform surpassed 7.5 million. The site attracts 96.3 million active buyers who recently bought goods through the platform. These figures include buyers and sellers associated with Reverb.com, the secondhand marketplace for musical instruments acquired by Etsy Inc. in 2019, as well as the Depop and Elo7 platforms.

From Brooklyn to the world

As of June 2021, Etsy was among the top ten most popular retail websites in the United States, ahead of Home Depot and Target. Etsy has also been able to implement a strong mobile strategy and grow its app business. Since 2017, more than half of the company’s gross merchandise sales volume was generated from the use of mobile devices. The platform also ranks among the leading shopping apps in its home market, with nearly one billion user sessions in 2021.

In addition to being an online shop, Etsy has also incorporated functions of social networks. Users can create personal public profiles, connect with one another, use features to add friends, write reviews, and send messages. When it comes to mobile demand, the U.S. remains Etsy’s most important market by app downloads.

Most of Etsy Inc.'s revenue is generated from its marketplace segment, powered by the fees users pay to sell their products on the company's online platform. In addition, Etsy earns services revenue, comprised of the fees a seller pays the company for optional services such as advertising and Etsy Shipping Labels.

In April 2022, a spark of controversy hit Etsy’s success as the company increased its transaction fee per item – a cost incurred by each Etsy shop globally. Etsy vendors, who play a key role in generating the company’s increasing sales volumes, organized a weeklong strike in protest of the new policy. Despite this, Etsy seller fees remain on the lower end compared to other major e-commerce marketplaces.

In the following 5 chapters, you will quickly find the 34 most important statistics relating to "Etsy". 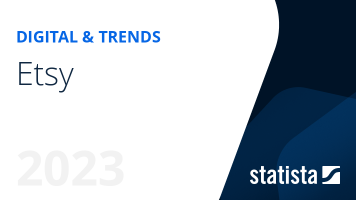 The most important key figures provide you with a compact summary of the topic of "Etsy" and take you straight to the corresponding statistics. 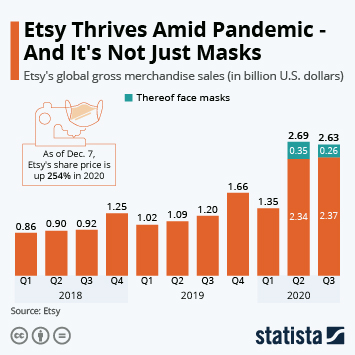 Etsy Thrives Amid Pandemic - And It's Not Just Masks 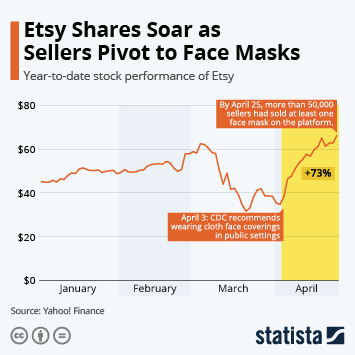