88.9k
As one of the world’s largest smartphone markets by value, Japan offers great business opportunities for device makers, with one prominent player sticking out. Despite criticism regarding a lack of innovation as well as intensified competition by South Korea’s Samsung, Apple remained the top smartphone seller in 2017. iPhones accounted for almost half of domestic smartphone sales, with the 5, 7, 8 and SE models dominating the scene.

According to a BCN ranking, the iPhone 7 topped the list accounting for nearly 25 percent of sold smartphone units in 2017. For Japanese customers, the iPhone 7 was significant in two aspects: not only was it the first waterproof iPhone, Apple also broke its policy of not customizing its products to a specific country by featuring FeliCa, Japan’s NFC technology found in train ticket gates, vending machines and store registers.

It remains to be seen if Apple can maintain its position in 2018. More Asian smartphone makers have positioned themselves in the Japanese market and overall smartphone sales shares have decreased compared to 2016. Besides Samsung and Huawei Technologies Co., Chinese manufacturer Oppo Electronic Corp. is waiting in the wings with a view to selling SIM-free, midrange smartphones. 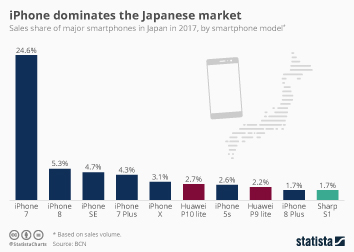 This chart shows the sales share of major smartphones in Japan in 2017, by smartphone model.