According to a United Nations paper and several media reports, 69 countries in the world have passed some sort of full or partial ban on plastic bags. While plastic bag bans are especially popular in Africa, a majority of the 32 countries who have opted instead to charge a fee (or tax) to limit plastic bag use are located in Europe.

Developing countries have been more likely to outright ban certain types of plastic bags since they are dealing with the mismanagement of plastic waste more. Africa has been most prominent among them since it lacks a strong lobby of plastic producers.

Notable exceptions to the trend are France, Austria and Italy, which have banned certain types of thin plastic bags and require them to be replaced with compostable ones - a very popular type of plastic bag ban around the world.

While the severity of plastic bag bans varies from country to country, only some places have outright banned all non-compostable plastic bags. Many countries exempt sturdier, easier-to-reuse plastic bags from their bans while simultanously requiring customers to pay a fee for those bags. Other restrictions that can be part of bans are limits on the production or import of plastic bags.

China is already listed as a country with a plastic bag ban since it outlawed thin plastic bags in 2008 and at the same time started to enforce a fee for sturdier bags. In early 2020, China announced it will substantially extent its laws to combat plastic bag use, first banning all non-compostable bags in major cities by the end of 2020 and extending this ban to the entire country by 2022.

The U.S., Canada and Australia still lack country-wide bans or fees on plastic bags, even though those laws have been implemented in some states. India, which was also working on a plastic bag ban, put plans on hold because of the COVID-19 pandemic. 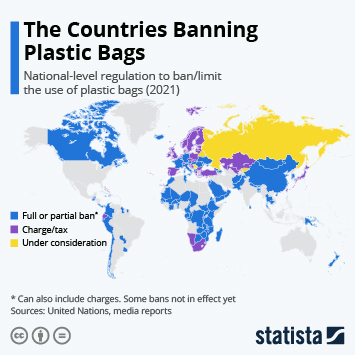 This chart shows national-level regulation to ban/limit the use of plastic bags.