Netflix reported mixed results for the fourth quarter of 2019 this week, as the company beat estimates on revenue and international subscriber growth but fell short of its domestic growth target. Between October and December, Netflix added just 420,000 paid subscribers in the United States vs. its own guidance of 600,000. Thankfully international growth more than made up for the shortfall, as the company exceeded its target by 1.3 million subscribers outside the U.S. (8.3 million new subscribers vs. 7.0 million projected).

To Netflix, subscriber growth is what iPhone sales are to Apple: the one metric that Wall Street tends to focus on, because it’s well-known that the company’s strategy of spending billions of dollars on content will only work if its subscriber base continues to grow.

Over the past twelve months, Netflix spent more than $14.6 billion in cash on streaming content. Add to that $4.4 billion in content payments due within the next 12 months and another $3.3 billion due in more than a year, and it becomes clear why the company’s shareholders are itching for new subscribers.

The beauty of Netflix’s gamble on making its own content is that the cost of producing a show is the same regardless of whether 10, 100 or 500 million people are watching it. Once the company reaches a certain number of paying subscribers, the business will carry itself nicely. For now, however, it doesn’t: Netflix burned through $3.3 billion in cash over the past 12 months, which is why its shareholders will continue to keep a keen eye on the company’s subscriber growth. 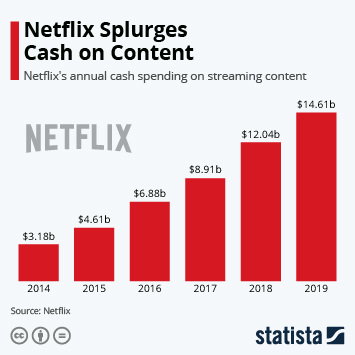 This chart shows Netflix's cash spending on content since 2014.