88.9k
Global connectivity has always been tested and inhibited by language barriers. Even if you have the latest smartphone or tablet, surfing the web would be meaningless if all of the content appears in a foreign language you cannot understand. There are technological solutions of course, particularly translation programs like Google Translate, but they still need further development to improve their reliability. Unfortunately for people who cannot speak or understand English, there is a considerable gap between languages used online and in the real world.

Chinese (including all of its varieties such as Mandarin and Wu) is the most spoken language worldwide with an estimated 1.3 billion native speakers, equating to 16 percent of the global population, according to Ethnologue. The web is dominated by another language, however, with English accounting for 54 percent of the top 10 million websites. That's according to W3Techs who analyze the technology of websites. Even though it dominates the real world, Chinese is further down the online pecking order, accounting for just 1.7 percent of websites.

There is also a sizeable real life and online gap in Spanish which has 442 million native-speakers but accounts for a mere 5 percent of websites. Even though German is actually the third most common language online, it still doesn't appear on the top-10 list of the world's most spoken languages. In addition to making accessibility and understanding difficult, scientists have warned that a lack of language diversity online could be contributing to the death of some languages across the world. 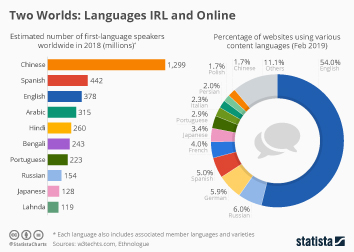 This chart shows the number of first-language speakers worldwide and a breakdown of website languages online.