Skip to main content
53k
74.6k
87k
88.9k
President Trump’s trade war against China and increasing protectionist sentiment in the West have resulted in a more frigid attitude towards Chinese investment for quite some time. As a result, Chinese acquisitions in the U.S. have fallen noticeably from 2016’s record highs and are unlikely to start growing again. Last week, President Trump signed an update to legislation for the Committee on Foreign Investment in the U.S. (CFIUS) that broadens national security scrutiny of foreign investments in the U.S. by imposing additional tightening of the rules for technology, real estate, infrastructure transactions and investment in businesses that handle personal data.

Until recently, Chinese investors perceived the U.S. as much more restrictive on foreign investment than Europe. Europe has been attracting considerably higher volumes of Chinese investment for at least a decade. However, Western Europe is also showing a recent trend of tightening the rules. After the controversial Chinese acquisition of the leading German industrial robotics company Kuka in 2016, Germany toughened up its foreign investment laws. This month, for the first time, the German government vetoed an attempted Chinese takeover of a German machine tool manufacturer, according to Bloomberg. Even the UK, who saw record high Chinese investment in 2017, recently unveiled a new policy enhancing government powers to prevent foreign acquisitions and it was largely focused on Beijing’s transactions.

Some analysts believe that China, while running out of options for acquiring the necessary technology, will speed up the opening of its own markets to the rest of the world and show some reciprocal treatment towards foreign buyers. 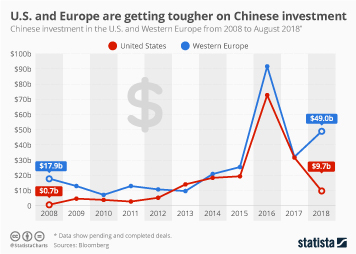 This chart shows Chinese investment in the U.S. and Western Europe from 2008 to August 2018.