Skip to main content
53k
74.6k
87k
88.9k
On Valentine’s Day, some steal hearts, some steal money, and some steal both. A recent and timely U.S. Federal Trade Commission report found that the number of romance related scams have been on the rise over the past four years.

In 2015, about $33 million worth of romance scams were filed with the FTC and by 2018, that number rose to $143 million. The number of people reporting romantic scams has also increased; 8,500 people reported that type of fraud to the FTC in 2015, while in 2018 about 21,000 individuals reported romantic scams.

According to the FTC, generally romantic scams start online, luring people in with “lifting photos from the web to create attractive and convincing personas.” The scammer makes up a name or pretends to be an actual person, often pursuing people on social media platforms, like Facebook or on dating apps.

After they have lured people into their fake persona, they begin asking for money, often citing medical emergencies or travel. The median loss reported from romance scams in 2018 was $2,600. For people over the age of 70, the median loss for romantic scams was $10,000. Most people wired money or gave reusable gift cards, some people even handed over their PIN, all largely irreversible money transfers. 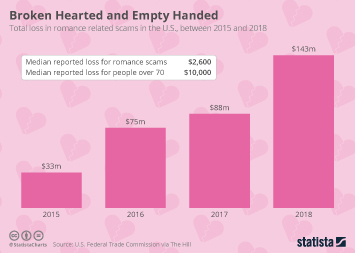 This chart shows the total loss in romance related scams in the U.S. between 2015 and 2018