An inked-up member of K-Pop boy group BTS has revived a discussion about tattoos, the taboos and also the laws surrounding their existence in South Korea. The group’s youngest member, Jungkook, showed his tattoo sleeve at the band’s online anniversary concert Muster Sowoozoo Sunday, igniting a storm of tweets and google searches.

Fans had caught glimpses of the singer’s tattoos, especially his knuckle ink, since 2019, but the full sleeve has never been on display before. The band has been known to cover up the tattoos especially at domestic appearances since many in South Korea still associate tattoos with deviant social behavior and many TV stations do not allow them. In a 2019 survey by the Seoul Consumer Citizens Association, 78 percent of Korean respondents actually said that they had a negative impression of tattoos on the body.

Even before the revelatory performance, Jungkook’s tattoos had caused a stir in the country. Just last week, a member of parliament and self-described BTS fan had used pictures of the singer’s covered knuckles on social media to lobby for ending the ban on tattooing outside of medical facilities. Since 1992, only medical professionals are allowed to carry out tattoos in South Korea, even though enforcement varies. In the survey by the Seoul consumer group, 84 percent of respondents said they agreed with the law. The lawmaker later apologized for bringing up the band to support her political agenda.

While tattoos have gotten more popular in South Korea, they remain rare. Only 12 percent of respondents in the consumer survey, which was carried out partly online and partly in person, said that they had a tattoo on the body. For comparison, in a comparable survey from 2018 between 35 percent and 48 percent of the online population in European, Latin American and Anglophone countries said they had a tattoo. 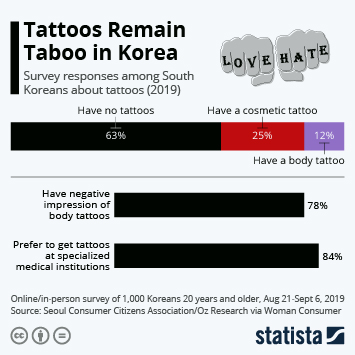 This chart shows survey responses among Koreans about tattoos (2019).