November 25 represents the UN International Day for the Elimination of Violence against Women and as statistics for England and Wales reveal, a disturbingly large share of women experienced some form of abuse before the age of 16.

As this infographic shows, 24.8 percent of women - representing around 5.1 million people - taking part in the 2019 Crime Survey reported having experienced emotional, sexual or physical abuse, or were witnesses to domestic violence/abuse, At 12 percent, the most common childhood abuse types reported were 'emotional' and 'sexual'.

As adults, the latest Crime Survey estimates that 1.6 million women aged 16 to 74 years in England and Wales experienced domestic abuse in the year ending March 2020 - around 7% of the female population. Within the ONS report, domestic abuse survivors' experiences are documented, one of which highlights one chance for abuse prevention which not only requires critical change from abusers, but from society as a whole:

﻿﻿If you or someone you know has experienced abuse, help is available. A list of contact points can be found at the bottom of this report. 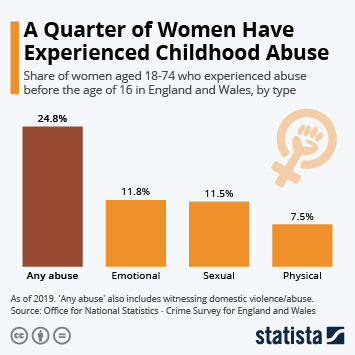 This chart shows the Share of women aged 18-74 who experienced abuse before the age of 16 in England and Wales, by type.