The Food and Drug Administration has for the first time received an application by a pharmaceutical firm that looks to start selling a contraceptive pill as an over-the-counter medication. According to the BBC, the move is unrelated to the recent Supreme Court decision that overturned Roe v. Wade, the previously long-standing precedent that guaranteed the right to abortion in the U.S.

The development is nevertheless meaningful in the context of the post-Roe world where the Democrats and women’s organizations are scrambling to expand other services to those who have lost access to abortion. According to the OCs OTC Working Group, over-the-counter contraceptives can be a puzzle piece in this endeavor, especially since a codification of abortion rights on the federal level is looking evermore futile. The issue has already gained support from Democrats on Capitol Hill, but it is expected that opposition could form at least against removing the prescription requirement for minors.

Looking at a world map of sales restrictions for contraceptive pills, developed countries typically require a prescription, while the medication is - either informally or formally - available over-the-counter almost everywhere else.

According to the working group, offering the pill over-the-counter can significantly reduce unwanted gaps in contraceptive use, which can occur in areas where doctors’ appointments are hard to come by, clinics are far away or people are short on funds to pay for medical visits or extra travel. Some reasons for contraceptive gaps are more minute, according to the source, and can occur when women run out of pills at an inconvenient time or contraceptives are forgotten at home ahead of a trip.

While some medical checks can be helpful before going on the pill, the American College of Obstetricians and Gynecologists as well as the American Medical Association and the American Academy of Family Physicians have spoken out in favor of the over-the-counter pill, saving that the benefits outweighed the risks especially for modern, well-researched contraceptive pills. Research has shown that checklist can be helpful for women to self-screen for potentially adverse health conditions, like high blood pressure, and find the right pill. According to a study on U.S. women who obtained over-the-counter pills in Mexico, a large majority of them continued to attend gynecological screenings. Of course, women can also still opt to discuss the right contraceptive method with their doctors before starting a regimen, with the added benefit that refills become much easier. 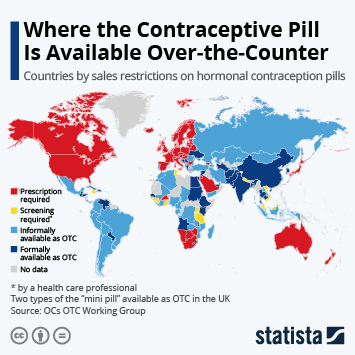