88.9k
The ongoing refugee crisis carries with it the prospect of countries putting permanent border controls back in place. Some of the 26 countries, that have signed up to the Schengen Agreement have already reintroduced short-term border controls, because of the unchecked influx of migrants. Austria, Germany, Denmark and Sweden are among those who have decided to reinstate controls.

The controls designed to stem the movement of refugees from south to north also hamper the free flow of traffic and therefore slow down the cross border exchange of goods and services. Even affecting tourism and cross border commuting. As the refugee crisis shows no sign of abating and with no prospect of securing Europe’s common outward border, reestablishing controls within could become a permanent reality again.

This would basically be the end of the Schengen Agreement as we know it. All the more worrying as the open borders policy is central to the European project, because the EU is based on the political and economic integration of its member states. The below chart is based on a report by the German Bertelsmann Foundation and stakes out the possible economic costs of closing the borders again.

It is based on the assumption of a worst case scenario in which controls would take place on all intra-European borders, constituting a complete dismantling of the Schengen Zone. This collapse would for various reasons make imported goods pricier. For example, just-in-time deliveries, on which many companies base their production cycle and sales, would be severely hampered.

The figures are projections and in this sense fallible. But it is very unlikely that hampering the free flow of people, goods and services would have no detrimental impact at all on the economies of the Schengen Area, of which non-EU states Switzerland, Norway, Iceland and Liechtenstein are also members. If Schengen fails, there will be a negative economic impact, it’s just hard to predict on what scale.

The economic fallout will also be felt by non-Schengen EU members such as Great Britain. The authors of the report come to the conclusion that: “In spite of favorable economic developments, Great Britain, according to our calculations, would be far worse affected by the long-term reinstallation of border controls within the EU than Germany”.

The authors predict that ripple effects of a Schengen collapse would even affect the two biggest non-EU markets, China and the US.

Note: To stem the flow of migrants across the Balkans into northern parts of Europe, the Austrian government, which has announced an even tighter border regime and the introduction of quotas this week, has invited the interior ministers of Balkan countries to convene in Vienna on Wednesday. On Thursday, European justice and interior ministers will discuss the situation with Serbian and Macedonian ministers in Brussel. 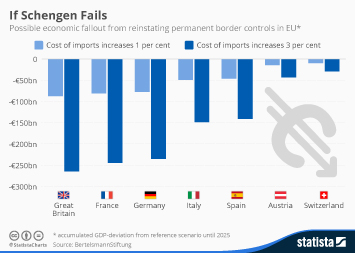