As a subdued E3 is drawing to a close, Nintendo is the last industry heavyweight to hold its virtual keynote on Tuesday. Aside from a slew of blockbuster games (Zelda, Mario and Pokémon might all make an appearance), the Japanese gaming giant is expected to unveil a “Pro” model of its Switch console, which was originally released in 2017.

Following the disastrous spell of the Wii U, which ended in its early retirement, Nintendo took a huge gamble with its follow-up console, the Nintendo Switch. Once again, the company didn't try to copy the successful recipe of Microsoft's Xbox or Sony's PlayStation business, but went with its own approach instead.

Little more than four years after the Switch's release in March 2017, it can safely be said that the gamble to make the Switch a hybrid between home and handheld console paid off. No other Nintendo console has had a better start in the United States and with almost 85 million units sold, it's already the second most successful console Nintendo has ever made.

As our chart illustrates, Nintendo successfully bounced back from its first major drought thanks to the Switch. In the fiscal year ended March 31, 2021, the company sold 28.8 million Switch units, which is even more than the company managed to sell at the peak of the successful Wii era. 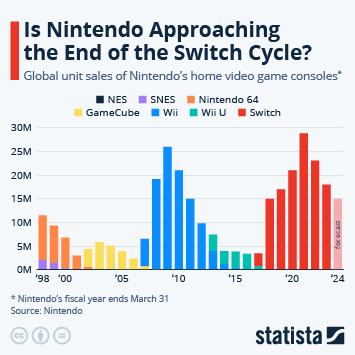 This chart shows how many video game consoles Nintendo sold since 1998.