Nintendo is a multinational consumer electronics and software company headquartered in Kyoto, Japan. Founded in September 1889 as a small Japanese firm producing handmade playing cards, Nintendo has evolved into one of the largest video game manufacturing companies. Operating as a single business segment, Nintendo’s operations are categorized by product type such as video game platforms, mobile, and playing cards. Most of Nintendo’s revenue is generated through sales of video game platforms.

Nintendo released its first series of home consoles in 1977 with the Color TV-Game. In 1983, the company released the Nintendo Entertainment System (NES), a console that has recorded close to 62 million lifetime sales globally. This was followed by the Super Nintendo Entertainment System (SNES), Nintendo 64 (N64), and Nintendo GameCube, respectively. In 2006, Nintendo released the Wii, the popular home console with motion control features, with its successor the Wii U released in 2012. Nintendo’s latest home console, the Nintendo Switch, was first released in 2017 and has sold over 100 million units throughout its lifetime.

Nintendo released its first handheld console in 1989 with the original Game Boy, a device that was followed by additional iterations such as the Game Boy Color and the Game Boy Advance. In 2014, the company released the Nintendo DS, achieving over 150 million lifetime sales. Popular game titles on the DS include New Super Mario Bros., Nintendogs, and Mario Kart DS. Nintendo released the 3DS in 2011, a device that enables the user to view the screen in 3D without the need for special glasses. The Nintendo Switch Lite, a more affordable version of the Nintendo Switch, was released by the company in 2019.

Of the all-time sales of video game consoles, Nintendo registers three devices in the top five – Nintendo DS, Game Boy, and Nintendo Switch. PlayStation devices complete the top five list with the PlayStation 2 and PlayStation 4 featured, while the Xbox 360 is the only device under the Xbox brand that makes its way into the top ten rankings. Of the leading current-generation game consoles, the Nintendo Switch has recorded notably more sales compared to the PlayStation 5 and Xbox Series X/S.
This text provides general information. Statista assumes no liability for the information given being complete or correct. Due to varying update cycles, statistics can display more up-to-date data than referenced in the text.

Timothy Owens
Research Lead covering technology and telecommunications
Get in touch with us now
Published by Timothy Owens, Nov 23, 2022 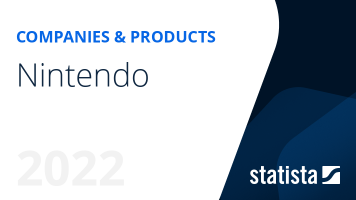 The most important key figures provide you with a compact summary of the topic of "Nintendo" and take you straight to the corresponding statistics.