In February 1992, on the premises of the Czech Technical University in Prague, the ceremonial connection of the Czech Republic (back then, Czechoslovakia) to the internet took place. Although a luxury for most people initially, the internet spread to most Czech households over the following decades.

In 2021, internet use was most common in the age groups of 16 to 24-year-olds and 25 to 34-year-olds. The share decreased with advancing age. Even though more internet users are male, the gender gap in this area has diminished since 2010. Regarding platforms, Google Chrome was by far the most used web browser. Google also dominated the search engine market, although some Czechs still preferred their native Seznam.

As of 2021, an overwhelming majority of all people between the ages of 0 and 54 lived in households with internet connection. The prevalent internet connection method was both the use of mobile and fixed-line connection. Only elderly households without children preferred using just the fixed-line internet. Meanwhile, 96 percent of all enterprises were hooked-up to the internet. Although a relatively high figure, it was the lowest percentage since 2013.

The rise of mobile internet

Mobile internet usage increased significantly over the past decade in Czechia, from 13.1 percent in 2012 to 72.1 percent in 2021. Mobile internet users were forecast to increase to 8.9 million by 2027. More people use Wi-FI than mobile data to connect to the internet, a trend that started in 2016. Despite this, mobile data traffic has increased tremendously over the past few years. This can be attributed mainly to the growing data packages available with affordable subscriptions, as reflected by the rising monthly mobile data usage per SIM card.

How do Czechs like to spend their time on the internet?

The most active group in the online environment in 2021 were working students who spent, on average, 1,836 minutes online weekly. Converted, this amounted to over 4.3 hours per day. However, non-working students, pupils, and apprentices spent only half of that time online.

Popular internet activities were online shopping, following the news, and communicating and being active on social media. The average time spent on social media platforms in 2021 reached a high of 165 minutes per day. Although the share of online shoppers grew, the percentage of individuals selling goods or services on the internet fell to its lowest point since 2010.
This text provides general information. Statista assumes no liability for the information given being complete or correct. Due to varying update cycles, statistics can display more up-to-date data than referenced in the text.
Published by Statista Research Department, Nov 23, 2022

Frequency of internet use in Czechia 2021 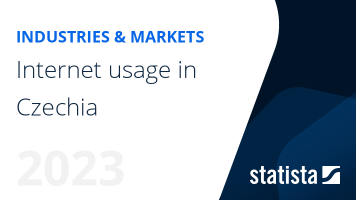 The most important key figures provide you with a compact summary of the topic of "Internet usage in Czechia" and take you straight to the corresponding statistics.