Social media has become very popular around the world. People use social networks as an effective way of keeping in touch with relatives, friends, colleagues, brands, and products. The number of global users increases annually, and Czechia is no exception. More than half of Czechs over the age of 16 have registered on at least one social media platform in recent years. Although social media is still the least trusted media in the country, users spend an average of 2.5 hours per day browsing social networks.

The dominant social media platforms in Czechia are YouTube and Facebook, with over six million users in 2021. Aside from these, there are many other popular social media platforms such as Instagram, Snapchat, Pinterest, Twitter, and LinkedIn. For example, Instagram had almost three million users in July 2021, and one in three Snapchat users post something daily or almost daily. As people use social networking sites for various purposes, they perceive every platform differently.

Traditional media is still an essential source of information for Czechs. However, digital media have become serious competition, especially among young people. As of 2021, nearly 75 percent of Czechs are daily internet users. Moreover, almost every Czech internet user aged between 15 and 29 years old was registered on at least one social network in 2021. According to Statista Digital Market Outlook, the number of monthly active social network users in Czechia is forecast to reach 7.91 million in 2022.
Due to the growing popularity of social media, companies started to use this tool as a new communication channel to promote their products and brands. In 2020, Czechs used the internet mainly for telephone or video calls, reading online news sites, and sending or receiving e-mails. In addition, social networking sites, such as LinkedIn or Twitter, are increasingly used during the recruitment process to advertise vacancies or to find potential employees.
This text provides general information. Statista assumes no liability for the information given being complete or correct. Due to varying update cycles, statistics can display more up-to-date data than referenced in the text.
Published by Statista Research Department, Nov 22, 2022 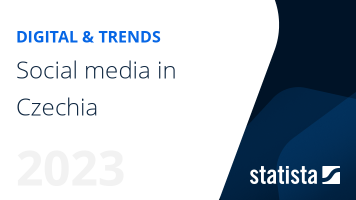 The most important key figures provide you with a compact summary of the topic of "Social media in Czechia" and take you straight to the corresponding statistics.