Published by F. Norrestad, Oct 29, 2021
Goldman Sachs is a key player in the global investment banking industry. Although the bank operates in several segments of the banking industry, it is probably most known for providing advisory services for mergers and acquisitions, and for being the underwriter for initial public offerings (IPOs). The bank was the underwriter of two of the largest IPOs in 2021: Coinbase and Roblox, which are also two of the largest IPOs throughout history. 2020 saw Goldman Sachs’ net revenues from investment banking activities exceed 9.4 billion U.S. dollars, with the largest share being generated from underwriting.

What do Goldman Sachs do?

In addition to investment banking, Goldman Sachs also has a global markets section, an asset management section, and a consumer and wealth management section. Their clients include corporations, financial institutions, governments, and high-net-worth individuals. Despite being so prominent within investment banking – they are the largest financial advisor to mergers and acquisitions worldwide and one of the largest underwriters for IPOs – it is not the area that brings the highest net revenues. Out of Goldman Sachs’ total net revenue of around 44.56 billion U.S. dollars in 2020, the largest share came from their Global Markets division, which provides Fixed Income Clearing Corporation (FICC) intermediation and financing, and equities intermediation and financing.

Who are their largest competitors?

Competitors and market position vary depending on which business segment is being considered. While a market leader when it comes to investment banking activities, the company is less prominent in other fields of the banking industry. In overall commercial banking performance, Goldman Sachs ranks only fifth in the United States, below JPMorgan chase (the largest), Bank of America, Citigroup, and Wells Fargo (commonly known as “the big four”). On a global scale, Goldman Sachs ranks 10th as the largest asset manager, competing against not primarily other commercial banks, but asset management firms such as market leader BlackRock, Vanguard, Fidelity, and State Street.

In the following 5 chapters, you will quickly find the 26 most important statistics relating to "Goldman Sachs".

The most important key figures provide you with a compact summary of the topic of "Goldman Sachs" and take you straight to the corresponding statistics. 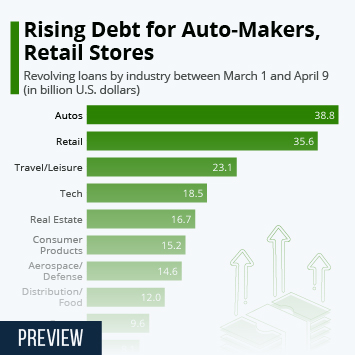 industries accumulating debt due to covid