Published by Statista Research Department, Aug 30, 2022
The history of Bank of America can be traced back to 1904, when it was known as Bank of Italy. At that time, the feature which distinguished the Bank of Italy from other American banks was that it offered financial services to immigrants arriving in the United States, not only the wealthiest American citizens. Today, the bank is a national giant, one of the most valuable banking brands and one of the leading banks in terms of assets or market capitalization globally. As of 2021, Bank of America was the fourth largest employer in the banking sector in the United States, with employment figure exceeding 133,000 people.

What does Bank of America do?

The bank provides a broad range of financial services, such as retail banking, wealth management, private banking, and business & corporate banking. The bank operates in several regions of the world, but most of the bank’s assets comes from the United States. The total assets of Bank of America reached over 3.1 trillion U.S. dollars in 2021, with the assets mainly composed of brokerage assets and assets under management; deposits and loans and leases account for a comparatively small share. Through its investment banking division, BofA Securities, the bank is also one of the leading banks in terms of revenue from investment banking.

Which are Bank of Americas main competitors?

In the following 5 chapters, you will quickly find the 26 most important statistics relating to "Bank of America".

The most important key figures provide you with a compact summary of the topic of "Bank of America" and take you straight to the corresponding statistics. 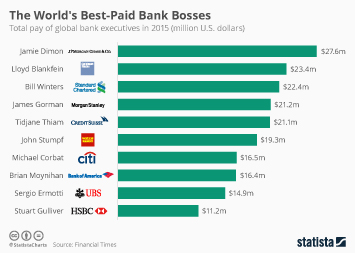