IPOs in the U.S. - statistics & facts

Published by Statista Research Department, Jan 7, 2022
An initial public offering, IPO, or stock market launch is the first sale of stock by a private company to the public. IPOs are often issued by smaller companies in search of the capital necessary to expand their operation but are also often performed by larger, privately owned companies looking to become publicly traded on stock exchanges. China has recently emerged as a leading IPO market but the United States remains close behind in terms of IPO volume. The largest IPO in the U.S. so far was that of Alibaba Group Holding in 2014, in which 21.77 billion U.S. dollars was raised.

What drives companies to file for an IPO?

IPOs can have many advantages and bring a great deal of benefits to companies; a stock market launch can provide companies with the means to raise expansion capital, diversify their equity base, provide access to cheaper bank loans, and increase exposure to the public. The best performing IPOs are generally those companies whose stock price trades up on the first day. However, IPO returns also differ by sector. For instance, the average IPO returns for a health care company were significantly higher than those of financial companies in 2020.

Are all companies more profitable post-IPO?

An IPO often has a large impact on the profitability of the company in question. The share of U.S. companies that were profitable after their IPO has been falling since a decade high of 81 percent in 2009. In 2020, this figure had dropped to only 22 percent, which may spell bad news for this form of raising capital. Industry experts believe that the rise in unsuccessful IPOs is a result of inflated market valuations of these companies pre-IPO. WeWork publicly filed its IPO paperwork in August 2019 and saw its market valuation fall from 47 billion U.S. dollars to eight billion U.S. dollars by November 2019.

In the following 4 chapters, you will quickly find the 22 most important statistics relating to "IPOs in the U.S.".

Statistics on the topic
Largest all-time IPO worldwide
Saudi Aramco
Leading country by number of IPOs
China
Number of IPOs in the U.S.
951

The most important key figures provide you with a compact summary of the topic of "IPOs in the U.S." and take you straight to the corresponding statistics.

IPOs in the United States

Effect of IPO on companies 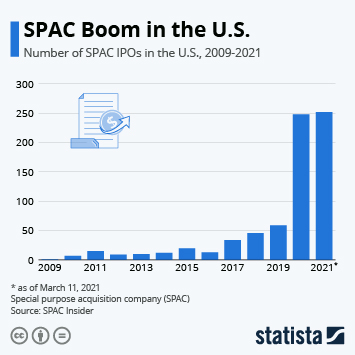 growth in us spac ipos 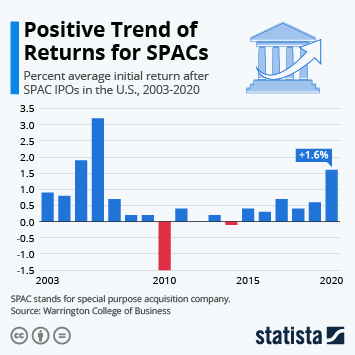