Published by S. Lock, Aug 31, 2021
Burger King is a quick service restaurant chain operating restaurants worldwide with headquarters based in Florida, United States. The restaurant chain was founded in Florida in 1953 under the name "Insta-Burger King". Insta-Burger King was purchased in 1954, by its two Miami-based franchisees David Edgerton and James McLamore, who renamed it "Burger King". Much like many quick service chains, its menu has since grown to include options such as breakfast, dessert, and signature menu items such as the "Whopper". Most recently, Burger King has released the "Impossible Whopper", made with a plant-based patty, to appeal to those reducing meat consumption. These days, Burger King is amongst the most valuable quick service brands in the world with a value of over six billion U.S dollars in 2020.

The franchising of Burger King

In recent times, the company has become an almost entirely franchised chain, with more than 18 thousand franchised restaurants. Today only 52 units remain company-owned. Although Burger King reduced the number of company-owned restaurants, overall the number of locations have grown annually over the last decade. This growth, however, was not reflected by Burger King's revenue, which has since decreased to 1.6 billion U.S. dollars in 2020. The cause of Burger King's most recent drop in revenue can be attributed to the coronavirus (COVID-19) pandemic.

In 2010, Burger King was purchased by the investment firm 3G Capital making it a privately held company. Investment firm 3G Capital went on to purchase the Canadian coffee house chain Tim Hortons in 2014, an indirect subsidiary of RBI merging the restaurants under the parent company Restaurant Brands International (RBI). Both Burger King and Tim Hortons maintain separate brands and headquarters despite Restaurant Brands International being a single publicly traded company, which began trading in December of 2014. Additionally, on March 27, 2017, RBI purchased Popeyes Louisiana Kitchen (via Orange, Inc) adding the restaurant to their subsidiaries.

In the following 3 chapters, you will quickly find the 20 most important statistics relating to "Burger King".

The most important key figures provide you with a compact summary of the topic of "Burger King" and take you straight to the corresponding statistics. 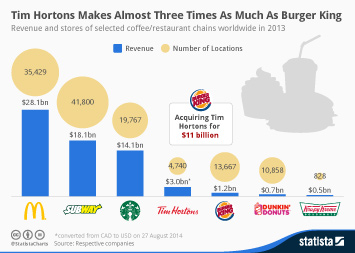