The history of HSBC

Today, HSBC is a global key player with total assets worth around 2.98 trillion U.S. dollars, but the history of the bank dates to 1865, when Hong Kong was a British colony, and the Shanghai International Settlement was established as a hub for trade between the West and East. That year, only a month apart, Scotsman Sir Thomas Sutherland founded The Hongkong and Shanghai Bank (today The Hongkong and Shanghai Banking Corporation Limited) in both cities to take advantage of the new trading opportunities into China. Almost a century later, a non-trading, dormant shelf company called "Vernat Trading Company Limited" was incorporated in England and Wales, later to be renamed HSBC Holdings plc and to become a parent of The Hongkong and Shanghai Banking Corporation Limited. Today the bank operates in all parts of the world, and with 226,000 employees all over the world, although the highest number of employees were in its home country.

Which segment generates the greatest revenues for HSBC?

HSBC operates in three distinct service segments: wealth and personal banking, global banking and markets, and commercial banking. The wealth and personal banking segment is the largest, accounting for almost half of the global revenues in 2020, and consists of global private banking, retail banking, and wealth management. The net operating income from this segment was around 22 billion U.S. dollars in 2020. The largest regions are Asia and Europe, and around 80 percent of the company’s global revenues in 2020 came from these two regions.

In the following 5 chapters, you will quickly find the 30 most important statistics relating to "HSBC".

The most important key figures provide you with a compact summary of the topic of "HSBC" and take you straight to the corresponding statistics.

Largest banks in the UK

Challenger banks in the UK 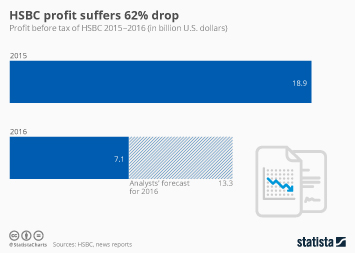