Published by F. Norrestad, Dec 1, 2021
Deutsche Bank is a leading global banking and financial services company headquartered in Frankfurt, listed on both the Frankfurt (FWB) and New York stock exchanges (NYSE). With assets amounting to over 1.3 trillion U.S. dollars in 2020, it was the eighth largest bank in Europe, and the eight largest investment bank globally. The assets of Deutsche Bank, however, dropped overall during the last decades, and the value in 2020 was far from its peak of around 2.2 trillion U.S. dollars in 2008. Despite this, Deutsche Bank has kept its position as the leading German bank in terms of total assets.

Not only the total assets of Deutsche bank dropped during the last decades. 2008 was also the year when the bank reported net losses for the first time in five decades. The share price of one share on Frankfurt Stock Exchange also dropped, down to around one tenth of the price in 2006, where the most significant price drop occurred in 2008. The price in 2019 was the lowest price investors had to pay since 1990. For the first time in 2018, the bank did not pay any dividend to its shareholders, after a gradual decline since 2008.

What do Deutsche Bank do?

In the following 5 chapters, you will quickly find the 27 most important statistics relating to "Deutsche Bank".

The most important key figures provide you with a compact summary of the topic of "Deutsche Bank" and take you straight to the corresponding statistics. 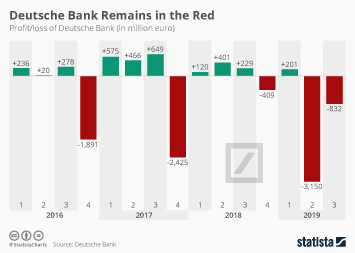