Published by Statista Research Department, Dec 1, 2020
The U.S. Italian food industry covers a large variety of special dishes and diverse product categories. In particular, the Italian gastronomy ranges from high-quality olive oils over typical Italian cheeses to internationally-known pizza and pasta specialties. It is a cuisine which has become popular and widely adopted all over the world.
Italian foods occupy a significant place in the food consciousness of Americans. Apart from dining at Italian restaurants, pizza delivery services are also popular among Americans. In 2019, consumers in the U.S. spent approximately 11 billion U.S. dollars on pizza delivery, an increase from 9.8 billion U.S. dollars spent in 2018.

There is a huge variety of refrigerated and frozen pizza brands available in U.S. retail stores. In 2017, Di Giorno was ranked as the leading pizza brand in the U.S. based on dollar sales amounting to about one billion U.S. dollars. In the same year, the brand accounted for around 22.8 percent of all frozen pizza sales nationally. According to a 2016 survey, 28 percent of U.S. consumers indicated that they buy frozen pizza instead of buying it from a restaurant because it is faster than delivery or carryout.

Pasta and rice are another popular category of Italian foods. There is a wide range of pasta varieties, such as dry rice, spaghetti/macaroni, refrigerated pasta, frozen pasta and noodles. In 2016, the sales of frozen pasta in the U.S. amounted to some 351.7 million U.S. dollars.

In the following 4 chapters, you will quickly find the 27 most important statistics relating to "U.S. Italian Foods Industry". 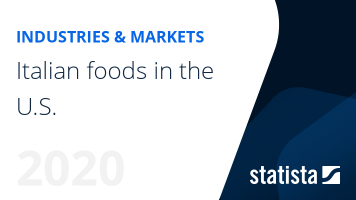 The most important key figures provide you with a compact summary of the topic of "U.S. Italian Foods Industry" and take you straight to the corresponding statistics.

Frozen Foods Market in the U.S. 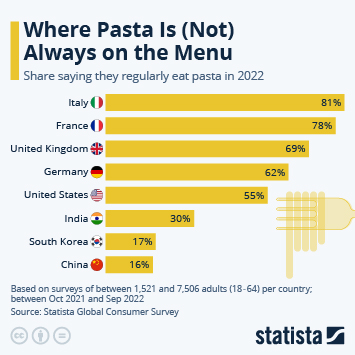