Published by S. Lock, May 18, 2022
Domino’s Pizza is a pizza delivery and take-out restaurant chain headquartered in Ann Arbor Charter Township, Michigan, in the United States. The company was founded as a one-store operation in 1960 by brothers Tom and James Monaghan when they purchased a pizza store named DomiNick’s in Ypsilanti, Michigan. The business was renamed Domino’s Pizza in 1965 and franchised soon after. The previously privately held company went public in 2004 and is now traded on the New York Stock Exchange. As well as pizza, the chain offers a range of other dishes, including pasta, oven-baked sandwiches, fried chicken, side dishes, and desserts. In 2021, Domino's brand value reached over 12.3 billion U.S. dollars.

How does Domino’s compare with other pizza restaurants?

As of 2021, there were over 75 thousand pizza restaurants in the U.S., but unlike some of its competitors, Domino’s primarily focuses on the delivery and carryout segments of the pizza industry. While many Domino’s stores offer casual seating and enable customers to watch the preparation of orders, they do not provide a full service dine-in experience. This focus on delivery and carryout services has proven successful, with Domino’s global revenue increasing steadily since 2009. In 2020, Domino’s ranked among the top ten leading quick service restaurant (QSR) chains in the United States. As consumer appetite for pizza has increased, the pizza category has become one of the most profitable sectors of the entire QSR industry. In 2021, consumer spending in the QSR pizza category in the U.S. reached 40.6 billion U.S. dollars.

After six decades of growth and almost four decades of international expansion, the number of Domino’s stores worldwide reached nearly 19 thousand in 2021. Domino’s not only competes against other popular pizza franchises like Pizza Hut, Papa John’s, and Little Caesars in terms of unit count, but also in terms of product quality, location, service, price, and customer satisfaction. According to the 2021 American Customer Satisfaction Index (ACSI) for leading QSR chains in the U.S., Domino’s ranked above all three competitors with a score of 80. This was up from the previous year and above the average score for quick service restaurant chains which was 78.

In the following 4 chapters, you will quickly find the 20 most important statistics relating to "Domino's Pizza".

The most important key figures provide you with a compact summary of the topic of "Domino's Pizza" and take you straight to the corresponding statistics.

Restaurants in the U.S.

Pizza restaurants in the U.S.

Fast food brands in the U.S. 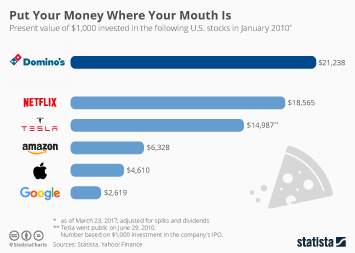