Published by Statista Research Department, Jul 6, 2022
Yahoo is a California-based, multinational online company brand known worldwide for its search engine, Yahoo Search, and the Yahoo web portal, which brings together various services, such as Yahoo News, Yahoo Finance, Yahoo Answers and most notably Yahoo Mail. The company also provides advertising services, online mapping and video sharing and had also started to move into the social media sector when it acquired Tumblr amongst much fanfare for over 1 billion U.S. dollars in 2013 (before selling the platform for less than 3 million U.S. dollars in August 2019). The original Yahoo company was founded by David Filo and Jerry Yang in January 1994 and was incorporated on March 2, 1995. The company was considered was one of the pioneers of the early Internet era in the 1990s and was considered one of the most popular online properties worldwide until its decline in the late 2000s.
Yahoo's recent company history is a complex one: In 2017, Verizon Communications acquired most of Yahoo's internet business for 4.48 billion U.S. dollars, excluding its stakes in Alibaba Group and Yahoo Japan which were transferred to Yahoo's successor company Altaba. After being purchased by Verizon, Yahoo's internet business was initially merged with AOL to form Oath, an umbrella company of Verizon's media and online properties. In January 2019, Oath as ultimately rebranded as Verizon Media. In April 2019, Altaba announced in a press release that it would sell its remaining Alibaba Group stakes and shut down at the end of 2019 and thus ending this chapter of online history.

Yahoo’s financial troubles, as well as those of other similar web companies, were in part due to Google’s almost complete domination of various market sectors, such as the search engine market. Although Yahoo Search is still considered competitive and has millions of users around the world, as of April 2019, just over 3 percent of worldwide internet users search the web using Yahoo’s service, while almost 89 percent use Google’s. As of the second quarter of 2019, Yahoo accounted for only three percent of total organic search and for two percent of mobile visits in the United States.

Currently, Yahoo has the dubious honor of leading the ranking of the most compromised data records in selected data breaches worldwide. With this in mind, it is hardly surprising that U.S. customer satisfaction with Yahoo has also decreased steadily since 2015.

In the following 5 chapters, you will quickly find the 42 most important statistics relating to "Yahoo".

The most important key figures provide you with a compact summary of the topic of "Yahoo" and take you straight to the corresponding statistics. 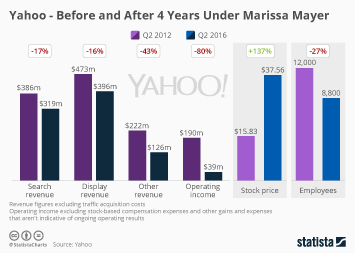