Tumblr is a New York-based internet platform, part microblog, part social network, which was created by web developers David Karp and Marco Arment and launched in 2007. Due to the company’s almost immediate success and popularity, it was acquired by technology giant Yahoo! Inc. in June 2013 for the sum of 1.1 billion U.S. dollars. As of July 2019, the platform had surpassed 472 million registered accounts. As of the same period, the website had almost 376 million unique visitors worldwide - a stark decline since December 2018, when the company decided to ban adult content on its platform. This decision has been Tumblr's undoing, as visitor numbers and community engagement dropped amongst public backlash. In August 2019, Automattic (parent company of blogging platform WordPress) purchased Tumblr for less than 3 million U.S. dollars, a far cry from the billion-dollar acquisition in 2013.
Tumblr’s blog-like function allows account-holders to use the platform in order to create diaries of their daily lives, to post different types of information that inspires them, as well as to liveblog about events as they happen or about TV shows as they are aired. The platform supports several different types of posts, such as text posts, whether plain or accompanied by images, hyperlinks or videos, but also photo posts, quote posts, link post, chat posts, audio posts and video posts, whether uploaded from a device or imported from websites such as Vimeo or YouTube. The social media function allows users to “like” and/or reblog a post. Another function permits communication between different accounts, although users can also chose to keep their content private. The website uses the followers-based system made famous by Twitter, where interested users can follow other users' blogs, whether they are friends, strangers or even celebrities.

Due to its fast-pace communication style, multiple mediums and heavy use of sometimes specific imagery, pop-culture references and slang, Tumbler is unsurprisingly most popular among young Millennials. Despite Tumblr being a relatively niche social network, its users used to be highly engaged until the content ban at the end of 2018 - however, as of March 2019, U.S. Tumblr app users spent an average of almost 118 monthly minutes on the social app, ranking behind Facebook, Snapchat, Instagram, Twitter, and Reddit.
This text provides general information. Statista assumes no liability for the information given being complete or correct. Due to varying update cycles, statistics can display more up-to-date data than referenced in the text.
Published by S. Dixon, Feb 8, 2022

Distribution of Tumblr.com traffic 2022, by country 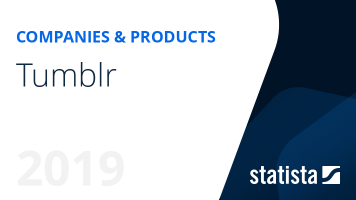 The most important key figures provide you with a compact summary of the topic of "Tumblr" and take you straight to the corresponding statistics.