The production and consumption of cereals in France - statistics & facts

Each year, around ten million hectares of land are used for the production of cereals in France, this represents more than half of the arable land in the country. The network of 265,000 farms associated with economic dynamism and a capacity to cultivate savoir-faire allows the cereal industry to be a significant source of employment. From production to the collection, the first transformation (milling, malting, starching, animal feed, etc.) to the second transformation (bakery, biscuit factory, brewery, etc.), the cereal industry provides around 444,000 jobs.
During the 2019/2020 season, 9.4 million hectares of cereal crops (excluding sweet corn and silage) were cultivated. This harvest includes nearly 423,000 hectares in organic holdings or in conversion, for a production of 71.3 million tons of cereals. While a dozen types of cereals are cultivated in France, most of the production focuses on four: soft wheat, grain corn, barley, and durum wheat, enjoyed across the nation and worldwide. Indeed, France is an important player on the world cereal stage. In 2019/2020, 34.3 million tons of cereals were exported as grain to the European Union and the rest of the world.

Historically, France is the first producer and first exporter of soft wheat in the European Union and ranks fifth worldwide. On average, between 35 and 40 million tons of soft wheat are produced each year in the country, intended mainly for animal feed, bread making, and starch production. Approximately 5 million tons of soft wheat are processed into flour each year, of which the majority is used for bread-making. As almost half of the population eats bread daily, it is indeed necessary to grow soft wheat in the country.
Another significant cereal is barley. Around 13 million tons of barley are produced in France annually, which is useful as France is the leading producer of barley for malting in the European Union and the world's leading exporter of malt. In fact, 20 percent of beers brewed in the world are made from French brewing barley and malt.
This text provides general information. Statista assumes no liability for the information given being complete or correct. Due to varying update cycles, statistics can display more up-to-date data than referenced in the text.

Share of arable land dedicated to cereal crops in France
52%

Breakdown of the arable land in France 2019, by kind of crop

Most produced type of cereal in France
Soft wheat

Cereal production distribution in France 2019, by type of cereal

Cereal production distribution in France 2019, by type of cereal

Cereals and their uses

Consumption of cereal and cereal products 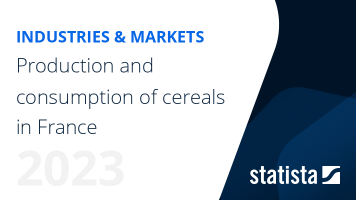 The most important key figures provide you with a compact summary of the topic of "Cereals in France" and take you straight to the corresponding statistics.