Since the beginning of the internet age, and with major development resultant from the coronavirus (COVID-19) pandemic, grocery shopping on the web has evolved into an increasingly popular alternative to physical supermarket trips in the United Kingdom (UK). The penetration rate of British individuals shopping online for food and other groceries has nearly tripled since 2015. Even though online grocery and food store sales had been growing with each passing year, the value of online sales suddenly spiked in 2020—the first year of the pandemic, due to lockdowns and stay-at-home advisories. Since then, online grocery has stabilized into a steady market of its own and now serves as a readily available option for shoppers regardless of how they choose to do their groceries.

Currently, between physical and online stores, the physical option remains the most prominent single-source way for shoppers to get their supermarket goods. The increased popularity of e-grocery, alongside the post-pandemic return to shopping in person, however, has left many shoppers comfortably open to the idea of buying groceries and food online. In 2022, many consumers in the UK have shifted from their in-store-only grocery shopping habits in favor of a more multichannel experience, with most shoppers preferring to tack on online shopping to their mainly in-store trips. This method of grocery shopping, mainly physical with a mix of online on the side, saw the most traction among UK shoppers aged 16 to 24, over half of which purchased their groceries this way.

In 2021, over 40 percent of shoppers in the UK believed they would continue food shopping online at the same level as they did during the pandemic following its end. Another third of respondents would continue shopping for groceries online, but less often. Forecasts on the penetration and growth rates of online grocery in the coming years reflect these intentions. While not detrimentally, the annual growth and usage rates are expected to slow down since the return of the option to safely purchase in stores again.

Tesco, one of the UK’s most well-known supermarket brands, was used by nearly half of online grocery shoppers in the country in 2022. The company’s website, tesco.com ranked number one both in e-commerce net sales and by the share of users who visit the site. Other popular brands in the UK online grocery scene included Sainsbury, Asda, and Ocada.

When asked which companies they would like to see offering online food ordering options, a 2022 survey revealed that Aldi was at the top of the list for over half of respondents. The German-headquartered grocery chain has operated in the UK for over three decades, and during the pandemic, it outsourced its delivery operations to Deliveroo for over 100 of its nearly 1,000 UK stores. With the growth decline of online grocery services, the company has ended this relationship, and will instead continue to focus on its own click-and-collect service.

Besides big-name brands like Tesco and Aldi, in 2022, one of the most regularly used online grocery delivery platforms in the UK was Dija, a dark store grocery retailer founded in 2020 by former Deliveroo employees. The platform was used regularly by over 25 percent of shoppers, and occasionally by an additional 30 percent.
This text provides general information. Statista assumes no liability for the information given being complete or correct. Due to varying update cycles, statistics can display more up-to-date data than referenced in the text.
Published by Statista Research Department, Jul 29, 2022

Online food and grocery penetration rate in the UK 2015-2025

Grocery shopping channels in the UK 2022

Use frequency of online grocery delivery platforms in the UK 2022

Tesco brand profile in the UK 2022 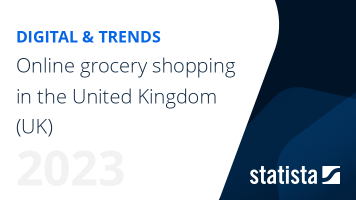 The most important key figures provide you with a compact summary of the topic of "Online grocery shopping in the United Kingdom (UK)" and take you straight to the corresponding statistics.