The Netherlands — a country known for delicacies such as gouda cheese, syrup waffles, and Dutch fries — harbors a population of roughly 17 million inhabitants. Despite its modest size, the Netherlands has one of the most advanced economies in the world, ranking among the countries with the largest gross domestic product per capita. The digital industry, in turn, has expanded tremendously in the last decade, totaling an e-commerce revenue of approximately 30 billion euros in 2021.
The digital space has also opened new revenue streams for grocers, as Dutch consumers increasingly opt for online grocery shopping. However, the supermarket revenue generated through online grocery shopping still accounts for only five percent. The industry is nonetheless growing with new advances such as mobile applications, intuitive website designs, and faster deliveries. In June 2021, the online supermarket revenue in the Netherlands amounted to over two billion euros. That year, the number of online food stores in the Netherlands exceeded 7,000 shops.

Dutch shoppers spend more time on grocery e-shopping than ever, but most are not yet fond of it. Online food shopping is seen as not convenient by many for numerous reasons: the closeness of physical supermarkets, the inability to inspect the quality of products, and simply having a better experience in brick-and-mortar stores. When Dutch consumers do shop groceries and beverages online, they mainly buy sweets and candy, bread and bakery products, and coffee and tea, among other food and drink staples. According to recent surveys, the typical Dutch online grocery shopper is a millennial man who is highly educated and lives in a densely populated area.

Supermarkets take over the online world

Albert Heijn, Jumbo, and Picnic were the three biggest online supermarkets in the Netherlands in 2021, together taking up almost 90 percent of the market share. Picnic is unique in the Netherlands because of its online-only supermarket business model. This start up closed an investment deal of 600 million euros in 2021, and originally operated in the Amsterdam area before expanding to the rest of the country and the Dutch-German border area.

All three of the most popular online supermarkets have trendy apps that harness mobile traffic and increase customer loyalty. More than half of Dutch consumers use supermarket apps a couple of times per week. Apps are used by online shoppers to find offers, save points, create shopping lists, and check prices.
This text provides general information. Statista assumes no liability for the information given being complete or correct. Due to varying update cycles, statistics can display more up-to-date data than referenced in the text.
Published by Statista Research Department, Sep 6, 2022

Market size of online grocery shopping in the Netherlands 2015-2021

Share of supermarket revenue generated online in the Netherlands 2015-2021

Number of online food stores in the Netherlands 2013-2021 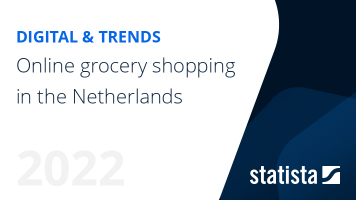 The most important key figures provide you with a compact summary of the topic of "Online grocery shopping in the Netherlands" and take you straight to the corresponding statistics.