Roughly 17 million people in the United Kingdom (UK) participate in some sort of water sport activity. Most commonly they just spend leisure time at the beach, go for coastal walks or swim outside. Approximately 3.9 million people in the UK take part in a recreational boating activity. Of those who go boating, 22 percent took part in it on at least six occasions throughout the year.
When it comes to water sport activity events in the UK, the region with the highest proportion of events is the South with 20 percent of any water sport activity event taking place in the South West and 20 percent in the Suth East, followed by Scotland with 11 percent. At least half of recreational boating participation takes place in summer and the share of people participating in any boating activity has fluctuated from 8.2 percent in 2002 to 7.3 percent in 2018, hitting its low in 2010 with only 5.6 percent of the UK population.

Swimming participation has slightly decreased in England to roughly 4.5 million people who go swimming at least twice a month. However, overall in the UK, outdoor swimming participation has gradually increased from 4.2 million people in 2015 to 6.1 million people in 2018, who went swimming outdoors at least once during the year. Other activites such as coastal walking, coasteering or just spending leisure time at the beach have also increased among British, while
This text provides general information. Statista assumes no liability for the information given being complete or correct. Due to varying update cycles, statistics can display more up-to-date data than referenced in the text.
Published by Statista Research Department, Jul 19, 2019

Number of adults participating in swimming at least twice a month in England in 2021
1.2m

Scotland: swimming participation of adults in the last 4 weeks 2007-2020 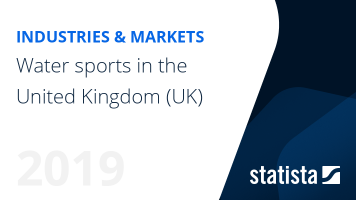 The most important key figures provide you with a compact summary of the topic of "Water sports in the United Kingdom (UK)" and take you straight to the corresponding statistics.