Published by
Christina Gough,
Mar 17, 2021
The fitness industry in Europe encompasses everything from physical activity and sports participation, to health clubs and online fitness apps. It is a multi-million dollar industry, which has been severely impacted by the coronavirus (COVID-19) pandemic. With the forced closure of fitness establishments across Europe, fitness fans were forced to find other ways to keep fit. In the United Kingdom, for example, consumers searched for fitness keywords such as "resistance bands" and "exercise bike" in an attempt to set up a gym in their own homes. Online exercise companies such as Peloton also profited from this enforced situation, reporting record revenues in 2020.
Before the crisis, the fitness industry in Europe looked in good shape. The revenues of the health club industry of European countries showed that Germany and the United Kingdom generated the most revenue by far, with roughly 5.6 and 5.5 billion U.S. dollars' worth in 2019, more than twice as much as the next countries on the list, France, Italy and Spain. The eHealth fitness segment showed a very similar trend with the United Kingdom having revenues at around 538 million U.S. dollars, Germany at 509 million, followed by France at 353 million U.S. dollars.

The number of health clubs, as well as the number of club members in Europe has been increasing in recent years, reaching approximately 63 million members across 65 thousand clubs in 2019. Within Europe, the number of health and fitness club memberships per country is highest in Germany and the United Kingdom with France, Italy, and Spain following,. This not just reflects the trend in health club revenues but, in fact, is one of the main contributing factors causing it. When looking at the number of fitness and health clubs in European countries, Italy has the second most clubs behind Germany but before the United Kingdom, indicating that Italian fitness and health clubs have fewer members per club.

When considering the location where people in Europe engage in sport or physical activity, most tend to use outdoor areas such as parks, or they workout in the comfort of their own home. The duration of vigorous physical activity, such as lifting heavy weights, digging, aerobics, or fast cycling appears to be slightly higher among males, yet is generally kept between 31 and 60 minutes for the majority of those who engage in it.

In the following 6 chapters, you will quickly find the 41 most important statistics relating to "Fitness industry in Europe".

The most important key figures provide you with a compact summary of the topic of "Fitness industry in Europe" and take you straight to the corresponding statistics.

Golf in the United Kingdom (UK) 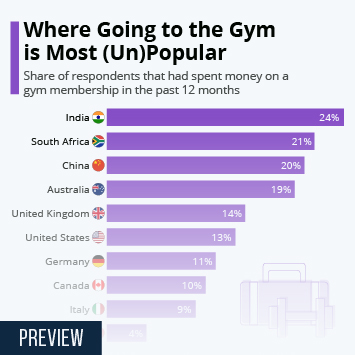