Published by
Julia Stoll,
Sep 18, 2020
Even though media usage habits have changed slightly in the last few years, according to the European Commission, television is still the most used medium in Europe, with 81 percent of individuals interviewed watching TV as of 2019. While the consumption of traditional media such as radio and written press have decreased, social networks and the internet are becoming increasingly important in the digital age. In 2019, over two thirds of respondents in Europe claimed to use the internet every day. For comparison: eight years earlier the share was not even half.
As of 2019, 77 percent of Europeans watched TV on a television set every day or almost every day. The country with the most individuals viewing TV on a TV set was Portugal, with a share of 94 percent, followed by Croatia (91 percent). Traditional television was not as popular in Luxembourg, Germany, Finland, and Sweden, where not even two thirds of respondents used TV sets (almost) every day. However, the share of the Swedes watching online television considerably rose, especially among younger age groups – in 2011, 32 percent of 15 to 24-year-olds watched internet TV daily, while the share was already 65 percent in 2019.

After television and the internet, radio is considered to be the third most important medium in the European countries. Based on the survey mentioned above, the usage of radio slightly decreased in the past years, reaching 48 percent of individuals in 2019. In addition, radio had the highest level of trust – the share of Europeans who tended to trust this medium was 57 percent that year. In comparison, only 20 percent had confidence in social networks. Radio was most popular in Slovenia and Ireland, with 66 and 65 percent of daily users in each country. Luxembourg (63 percent) and Slovakia (62 percent) followed.

Compared to other media the written press has the lowest reach. In the Netherlands, for instance, only about 40 percent of individuals were reached by newspapers in 2018 – down from a share of 66.5 percent in 2010. A similar development can be observed in Norway. Whereas Norwegians spent 25 minutes per day reading newspapers in 2009, ten years later the daily time spent amounted to an average of nine minutes. In this respect, older age groups in particular tend to use printed media. In 2019, individuals aged 67 to 79 years spent 34 minutes on reading newspapers. 25 to 44-year-olds read newspapers for just four minutes per day.

In the following 4 chapters, you will quickly find the 25 most important statistics relating to "Media usage in Europe".

The most important key figures provide you with a compact summary of the topic of "Media usage in Europe" and take you straight to the corresponding statistics.

Trust in media in Europe 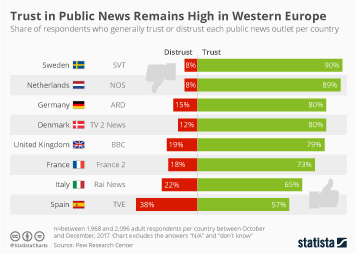 Trust and distrust in public Broadcasters in Europe