In North America, the humble banana may find itself half a world away from its origins of South East Asia. But like many an immigrant before, the banana has forged a formidable presence on the continent. In 2020, yellow bananas made up 90.3 percent of banana sales share in the United States. In comparison, plantain/macho bananas made up around 3.9 percent of banana sales.

A look at the world production of bananas, suggests that the thirst for bananas in North America cannot be quenched by local production. While Asia is the dominant region in terms of production quantity, South American countries have the strongest presence regarding banana exports. In 2020, Ecuador was the biggest player in the market, commanding a 27.7 percent share of banana exports worldwide.

Banana exporters will likely continue their attempts to expand their influence on North American markets. The amount of bananas imported into Canada has increased year on year since 2008 and bananas beat out all other fresh fruits in terms of per capita consumption in the United States. After all, the energy rich content of the banana and its edibility on the go mean it isn’t likely to lose its place among North America’s favorite fruits.
This text provides general information. Statista assumes no liability for the information given being complete or correct. Due to varying update cycles, statistics can display more up-to-date data than referenced in the text.

Production of bananas worldwide by region 2020 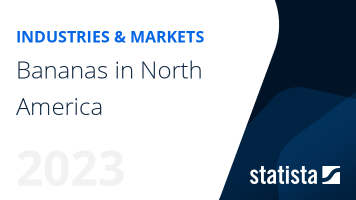 The most important key figures provide you with a compact summary of the topic of "Bananas in North America" and take you straight to the corresponding statistics.