Finland is the northernmost agricultural country in the world. In 2021, around 14.4 percent of the country’s agricultural land area was under organic cultivation. Organic land area has grown steadily in recent years, and it is projected to further increase up to 396,000 hectares by 2027. The largest organic agricultural land areas are located in Northern and Southern Ostrobothnia, as well as in Southwest Finland (Varsinais-Suomi).
There were almost five thousand organic farms in Finland, which accounted for over 11 percent of all farms in the country. The number of farms practicing organic cultivation is expected to increase in the future. By the end of 2022, Finland is predicted to have over 5,900 organic farms. Furthermore, the average size of organic farms has risen, reaching nearly 67 hectares per farm as of 2021. The most cultivated organic crop in terms of production volume is oat, with roughly 58 million kilograms in 2021. The yields of organic wheat, barley, rye, and oats were overall better than in the previous years.

Regarding meat production, beef cattle and pigs are the most raised livestock in Finland. In 2021, almost 4.55 million kilograms of organic meat was produced in the country, increasing from the previous year. Beef accounts for the majority of organic meat production, with production volume of 3.46 million kilograms per year. Compared to other types of organic meat, lamb was produced at a lower volume of 320 thousand kilograms. However, it accounted for nearly 24 percent of all lamb production in the country.
This text provides general information. Statista assumes no liability for the information given being complete or correct. Due to varying update cycles, statistics can display more up-to-date data than referenced in the text.
Published by J. Clausnitzer, Oct 19, 2022 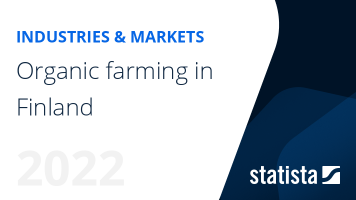 The most important key figures provide you with a compact summary of the topic of "Organic farming in Finland" and take you straight to the corresponding statistics.