A soft drink is a drink that typically contains carbonated water, a sweetener, and a natural or artificial flavoring. Soft drinks may also contain caffeine, colorings, and preservatives. Canada stood in eleventh place in the global soft drinks market in 2020, with a revenue of around 12 billion U.S. dollars. The United States was the clear frontrunner in the market, bringing in almost 270.4 billion U.S. dollars from soft drinks alone in the same year. The United States and Mexico consumed the highest volume of carbonated soft drinks in the previous year: Mexico consumed approximately 634 8-ounce servings per capita, while it was 618 8-ounce servings for the United States.
Soft drinks were first commercialized in Canada as medicinal elixirs or tonic in the early 19th century when small carbonated bottling operations were established. The industry has since grown to sell almost three billion units of flavored soft drinks per year. Dollar sales of flavored soft drinks reached approximately 1.4 billion Canadian dollars, making them a favorite cold drink option among consumers. Pepsi and Coca Cola are among some of the most popular soft drinks in Canada and some of the main Canadian brands include: Canada Dry, Crush, Big 8, and Clearly Canadian.

However, due to recently prevalent dietary concerns regarding obesity and sugar intake, the appeal of sugary soft drinks has depleted. The volume of soft drinks available for consumption per person in Canada dropped from 82.93 liters in 2010 to 52.78 liters in 2020. The volume of soft drinks imported into Canada in 2020 amounted to around 321 kiloliters and for that same year, the volume exported from Canada stood at approximately 190 kiloliters.
This text provides general information. Statista assumes no liability for the information given being complete or correct. Due to varying update cycles, statistics can display more up-to-date data than referenced in the text.
Published by M. Ridder, Apr 4, 2022

Global soft drink market share of Coca-Cola 2006-2015, based on volume 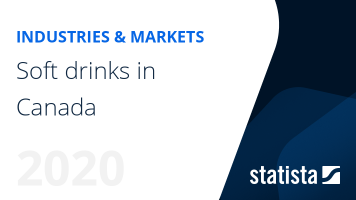 The most important key figures provide you with a compact summary of the topic of "Soft drinks in Canada" and take you straight to the corresponding statistics.