Retail store sales of non-alcoholic beverages generated approximately 9.14 billion Canadian dollars in 2020. Despite a survey finding 63 percent of Canadian consumers believe drinking from plastic water bottles is not good for their health, bottled water was one of the most popular soft drink categories, with 55 percent of respondents claiming to have consumed the beverage in the past month. In the past, bottled water sales reached approximately 3.83 billion U.S. dollars, and were forecast to increase to around 4.46 billion U.S. dollars in 2022.
This text provides general information. Statista assumes no liability for the information given being complete or correct. Due to varying update cycles, statistics can display more up-to-date data than referenced in the text.
Published by M. Ridder, Feb 25, 2022

Market volume of the beverage industry in Canada 2014, by category

Cola share of the soft drink industry in Canada
43.1%

Product segmentation of the soft drink industry in Canada 2013

Market value of bottled water in Canada 2014, by type

Revenue of the non-alcoholic drinks market worldwide by country 2022 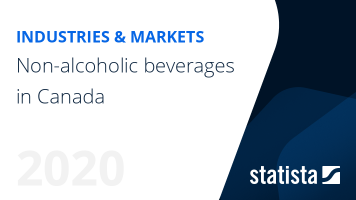 The most important key figures provide you with a compact summary of the topic of "Non-alcoholic beverages in Canada" and take you straight to the corresponding statistics.