Published by
Christina Gough,
Jun 17, 2021
The Green Bay Packers is a professional football team that competes in the National Football League (NFL) as a member of the National Football Conference (NFC) North division. Founded in 1919 by Earl "Curly" Lambeau and George Whitney Calhoun, the Packers are the third-oldest franchise in the NFL and are the only non-profit, community-owned team in the league.
The Packers have played their home games at the Lambeau Field in Green Bay, Wisconsin since 1957. In 2019, their average regular season home attendance amounted to 77,845 per game. The team’s franchise value in 2020 stood at approximately three billion U.S. dollars and it generated a revenue in 2019 of around 485 million U.S. dollars. The team’s operating income for 2019 amounted to 88 million U.S. dollars. The team is run by a board of directors and its current president and chief executive officer is Mark Murphy.

The Packers have won 13 league championships, the most in NFL history, with nine pre-Super Bowl NFL titles in addition to four Super Bowl titles in 1967, 1968, 1997, and 2011. Given the Packers' success and the star quality of some of its recent players such as Brett Favre and Aaron Rodgers, it is no surprise that the team is well-supported locally and further afield. The Packers' official Facebook and Twitter pages currently have a combined total of more than seven million followers.

In the following 4 chapters, you will quickly find the 23 most important statistics relating to "Green Bay Packers". 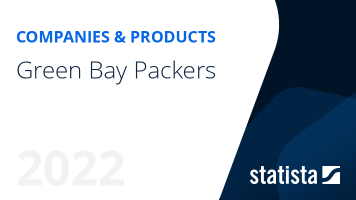 The most important key figures provide you with a compact summary of the topic of "Green Bay Packers" and take you straight to the corresponding statistics.