The Indianapolis Colts are a professional football team that competes in the National Football League (NFL), in the American Football Conference (AFC) South division. The Colts were founded in Baltimore, Maryland as the Baltimore Colts in 1953, before eventually relocating to Indianapolis in 1984. In 2020, the franchise value for the Indianapolis Colts amounted to approximately 2.85 billion U.S. dollars.
The Colts have played their home games at the Lucas Oil Stadium in Downtown Indianapolis since the 2008 season, following the demolition of the previous home arena, the RCA Dome. In 2019, the team’s average regular season home attendance amounted to 61,110. The Colts' revenue in 2019 stood at around 426 million U.S. dollars and their operating income for that year was estimated at about 66 million U.S. dollars. James Irsay is the team’s current owner and CEO.

The Colts have made four Super Bowl appearances in their history, winning two: once as the Baltimore Colts in 1971 and the other in 2007 after moving to Indianapolis. As of 2020, the Colts had a combined total of 3.24 million Facebook and Twitter fans and followers.
This text provides general information. Statista assumes no liability for the information given being complete or correct. Due to varying update cycles, statistics can display more up-to-date data than referenced in the text. 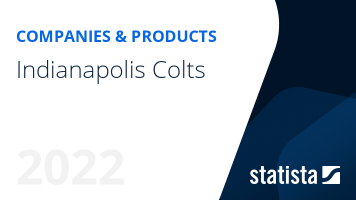 The most important key figures provide you with a compact summary of the topic of "Indianapolis Colts" and take you straight to the corresponding statistics.