The Cleveland Browns are a professional football team that compete in the National Football League (NFL) in the league's National Football Conference (NFC) North division. The franchise was established in 1945 by businessman Arthur B. Bride and coach Paul Brown, whom the team is named after. The team is currently owned by Jimmy Haslam and, as of 2020, the Browns’ franchise value stood at around 2.35 billion U.S. dollars.
The Browns’ administrative offices and training facilities are currently located in Barea, Ohio, while the team’s home games are played at the FirstEnergy Stadium in Cleveland, Ohio. The Browns’ average regular season home attendance in 2019 was 67,431 and the average ticket price for their home games in that year amounted to around 73.91 U.S. dollars. The team’s revenue in 2019 stood at approximately 431 million U.S. dollars and its operating income for that year was at around 87 million U.S. dollars.

The Browns dominated the NFL in the 1950s, winning three NFL championships in 1950, 1954, and 1955, as well as one more in 1964, but have yet to make a Super Bowl appearance and their most recent playoff appearance came back in 2002. The Browns have a combined total of more than 2.6 million Facebook and Twitter fans and followers.
This text provides general information. Statista assumes no liability for the information given being complete or correct. Due to varying update cycles, statistics can display more up-to-date data than referenced in the text.

Christina Gough
Research expert covering sports and video gaming
Get in touch with us now
Published by Christina Gough, Jun 20, 2021 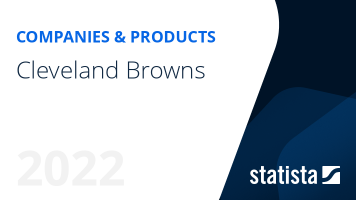 The most important key figures provide you with a compact summary of the topic of "Cleveland Browns" and take you straight to the corresponding statistics.