Australian coffee culture developed from cafés owned by Greek and Italian migrants, slowly brewing from the post-war immigration boom in the 1950s and 1960s, to becoming a nationwide obsession that is now part of Australia's cultural identity. Over the last decade Australia’s coffee imports have more than doubled, likely fueled by the booming café industry and an ever-increasing appetite for coffee and coffee beverages.
In terms of coffee production, Australia is not a major coffee bean producing country. Nonetheless, the Australian coffee market is among the largest in the world. In terms of exports alone, Australia exported nearly 70 million Australian dollars’ worth of coffee and coffee substitutes in 2020 and the annual domestic coffee consumption totaled more than 1.9 million 60-kilogram bags. On average, Australians consumed around two kilograms of coffee per person in 2021, out of which 0.7 kilograms were roast coffee and around 1.4 kilograms were instant coffee. However, considering the per capita consumption, Australians are far behind Finland, Scandinavian countries and other European countries, but still among the leading 30 coffee consuming countries.

Cafés, restaurants and takeaway services contribute more than 4.5 billion Australian dollars in gross value added to the Australian economy. An estimated 96,000 people will be employed in cafés and coffee shops in Australia in that same year. Regarding coffee consumption and preferences, Australians like their coffee on the go. Around 23 percent of all coffee orders are coffee-to-go orders, ranking Australia fourth behind Japan, the United States and Canada in terms of coffee-to-go. The most popular cup sold in cafés and coffee shops in Australia was the latte, followed by the flat white and the cappuccino. In 2019, the average price for a latte ranged from almost four Australian dollars in Queensland, Victoria and the Australian capital territory to over 3.6 Australian dollars in the Northern Territory and New South Wales.
This text provides general information. Statista assumes no liability for the information given being complete or correct. Due to varying update cycles, statistics can display more up-to-date data than referenced in the text.
Published by Statista Research Department, Apr 1, 2022

Revenue of the coffee market in Australia
5.8 bn USD

Revenue of the coffee market worldwide by country 2021 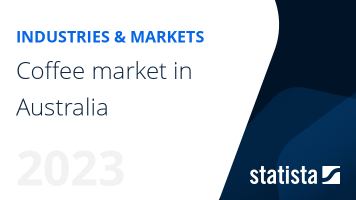 The most important key figures provide you with a compact summary of the topic of "Coffee market in Australia " and take you straight to the corresponding statistics.