Australia ranks sixth in the world in terms of wine production, behind the traditional wine producing countries Italy, France, and Spain. The country boasts 65 wine regions including the Hunter Valley in NSW, Barossa Valley in South Australia, and the Yarra Valley in Victoria which produce more than 10 million hectoliters of wine annually. Major wine varieties grown in Australia include the red varieties Shiraz, Cabernet Sauvignon, and Merlot and white varieties Chardonnay, Sémillon and Sauvignon Blanc.
The wine production industry in Australia generates over six million Australian dollars annually and is projected to continue growing in value. The Australian market represents just 22 percent of Treasury Wine Estates Limited’s total net sales, yet the company is Australia’s largest wine producer followed by Accolade Wines, Casella Family Brands, and Pernod Ricard Winemakers. Shiraz is the variety of choice for Australian wine growers, with almost 40,000 hectares of land used for growing the red wine grape, compared to less than 25,000 hectares for Cabernet Sauvignon.

In terms of global wine consumption, Australia only ranked tenth in 2020 and production of wine has dropped to less than 1200 million liters in 2019 after particularly good wine production seasons in the three years from 2016 to 2018. Despite the high quality and steady demand for domestic wine, imported wines remain popular with the majority of imported wine coming from New Zealand and France. Nevertheless, the trade balance of wine in Australia is positive, with exports considerably exceeding imports, largely supported by China’s increasing taste for Australian wine. Based on export volume, Australia was the fifth largest wine export nation worldwide in 2020.
This text provides general information. Statista assumes no liability for the information given being complete or correct. Due to varying update cycles, statistics can display more up-to-date data than referenced in the text.
Published by Statista Research Department, Apr 1, 2022

Size of the total vineyard area Australia 2019 by variety

Amount of grapes crushed in Australia 2022, by variety 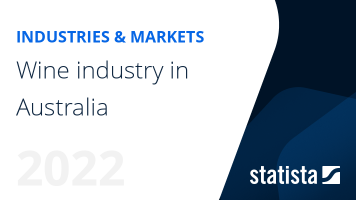 The most important key figures provide you with a compact summary of the topic of "Wine industry in Australia" and take you straight to the corresponding statistics.

Wine consumption and sales in Australia