Grill and barbecue market in the U.S. - Statistics & Facts

Published by
C. Simionato,
Feb 3, 2022
Few things are as all-American as a summertime barbecue party, complete with cold beers and hot dogs. Humans have been grilling and barbecuing for millennia and while people from all over the world continue the tradition today, Americans are particularly fond of it. In 2021, the American barbecue grill market was valued at approximately 2.75 billion U.S. dollars, up from 2.19 billion dollars in 2015. The gas grill is the most frequently owned type of grill in the U.S., followed by the classic charcoal grill.
The classic American barbecue typically involves the grilling of steaks, burgers, and hot dogs. Recent survey data shows that beef steaks are the most popular choice of meat, with 34 percent of American consumers citing the steak as their favorite grilled meat. Hamburgers, chicken, and ribs are also popular choices in 2021. An overwhelming majority of barbecue food consumers like to eat their cuts with sauces and marinades, preferably from the brands A-1, Sweet Baby Ray's, or Heinz.

The barbecue and grill market is not merely a domestic market in the United States. When looking at the U.S. trade balance of domestic cooking devices including barbecues and grills, it is apparent that the import value far exceeds the export. In fact, the U.S. imported more than four billion USD of stoves, cookers, grills, and barbecues in 2020, whereas the export value was roughly 420,000 USD.

Surveys have also shown that 68 percent of Americans do not need a special occasion to fire up their barbecue, and will do so whenever they feel like it, though it certainly helps if the weather is good. Perhaps unsurprisingly, the vast majority of barbecue parties occur from late spring to early autumn, where the 4th of July is the most popular barbecuing day of the year.

In the following 5 chapters, you will quickly find the 28 most important statistics relating to "Grill and barbecue market in the U.S.". 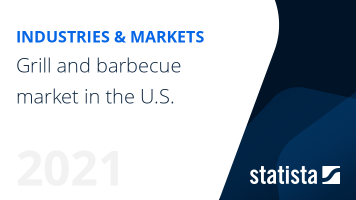 Go to report Grill and barbecue market in the U.S.
Top Seller

The most important key figures provide you with a compact summary of the topic of "Grill and barbecue market in the U.S." and take you straight to the corresponding statistics.

National holidays in the United States