The tobacco market in Japan is connected to a rigid industry dominated by the state-owned monopoly Japan Tobacco, Inc. and two other global manufacturers. The sole domestic manufacturer Japan Tobacco markets a broad line of flagship brands, with Seven Stars and Mevius showing the highest commercial success among the most popular cigarette brands in Japan. Among international companies, British American Tobacco overtook the competitor Philip Morris with its product line surrounding the Kent brand.
As stipulated and protected by the Tobacco Business Act, Japan Tobacco possesses the only permit to manufacturing of tobacco products in Japan. To regulate its monopoly, the company is obliged to purchase the entire harvest of tobacco leaves produced in the country. Additionally, the Japanese Ministry of Finance is required to own at least one third of stocks in the multinational corporation with stakes in the food processing and pharmaceutical industries.

Sustained by the backing of the Ministry of Finance and the high tax revenues generated through sales of tobacco products, efforts for smoking bans and other regulations were commonly inhibited, to the point of Japan being referred to as a ‘smoker’s paradise’. Instead, the market flourished steadily, with store retailing, tobacco bars and a small number of vending machines making cigarettes widely available. As smoking was allowed in almost all areas, it was common to light a cigarette at food service establishments as well as private areas.
The most common tobacco products consumed in Japan were traditional paper-rolled cigarettes, while heat-not-burn tobacco products are growing in popularity. Other legally permitted alternatives include cigars, traditional smoking pipes (kiseru), chewing and snuffing tobaccos, general smoking pipes, and shishas. Electronic products containing nicotine, however, struggled with domestic market entry. Due to nicotine-containing liquids being classified as a medicinal product, the distribution is predominantly restricted to private uses for medical purposes.

Tightening the reins for Tokyo Olympics 2020

Recent trends are hinting at a drastic change of direction towards a shrinking tobacco market and extensive smoking bans on a prefectural level in Japan. Beginning with the steadily declining number of farmers in tobacco plant cultivation, a downward trend in cigarette sales, and the increasing awareness of health risks prompting to quit smoking, Japan Tobacco is reporting diminishing revenue with its domestic tobacco business.
Additionally, following the announcement that the 2020 Summer Olympics will be held in Tokyo, the Japanese government started amending passive smoking regulations in Article 25 of the Health Promotion Act in July 2018. In accordance with the full implementation in April 2020, smoking cigarettes was subsequently prohibited in public facilities, offices as well as most food service establishments and public areas. Consequently, a smoking ban was enforced on an unprecedented national dimension.
Even though smokers felt troubled by the amendments, recent restrictions turned into an opportunity to quit smoking. In addition, non-combusted tobacco products are arousing consumers’ interest as a permitted alternative to cigarettes for indoor smoking due to the marketed reduced smoke production. With the Tokyo Olympics 2020 moved to 2021 due to the global coronavirus (COVID-19) pandemic, the restrictions were expected to remain in place for the time being, providing smokeless tobacco products an opportunity to grow in the Japanese market.
This text provides general information. Statista assumes no liability for the information given being complete or correct. Due to varying update cycles, statistics can display more up-to-date data than referenced in the text.
Published by C. Diep, Oct 26, 2022 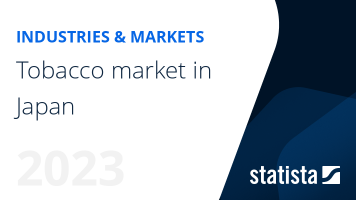 The most important key figures provide you with a compact summary of the topic of "Tobacco industry in Japan" and take you straight to the corresponding statistics.