The Canadian footwear market is not the largest in the world. Only a negligible percentage of the many billions of pairs of shoes that were produced worldwide in 2020 were sold in Canada, compared to the consumption of shoes in countries like China and India. However, that is not to say that Canadians do not love their shoes; the country ranks relatively high in the per capita spending of countries on apparel and footwear and has a shoe market forecast to grow to a value of more than eight billion Canadian dollars.

Ontario alone is home to around 950 shoe stores, the highest number of shoe stores in any Canadian province. In 2021, shoe stores in Canada generated retail sales amounting to almost 3.3 billion Canadian dollars. This was an improvement on the previous year, but retail in 2020 was heavily affected by lockdown measures imposed in response to the coronavirus (COVID-19) pandemic. The 2021 figure was still almost 900 million Canadian dollars behind the sales in 2019.

Most of the shoes imported into Canada come from Asia, primarily China. Italy represents European countries, ranking as Canada’s third-largest partner for shoe imports. Canada imports significantly more footwear than it exports. As of December 2021, there were 56 footwear manufacturing establishments in Canada, with the largest share located in Ontario and Quebec. The vast majority of Canadian footwear exports are sent to the United States.

One footwear segment which has been increasing in popularity is athletic footwear. Over the past years, the segment has seen an increase in the total footwear market share across men’s, women’s, and children’s shoes. This reflects the general trend of the increasing popularity of activewear in day-to-day fashion. Sales of men’s athletic footwear in Canada are consistently highest in the second half of the year and have been increasing yearly. Sales reached their highest levels in the third quarter of 2021, as did the sales of women’s athletic shoes.
This text provides general information. Statista assumes no liability for the information given being complete or correct. Due to varying update cycles, statistics can display more up-to-date data than referenced in the text.
P. Smith
Research expert covering apparel industry and general merchandise
Get in touch with us now
Published by P. Smith, Jun 17, 2022

Forecast value of the footwear market in Canada 2019-2026 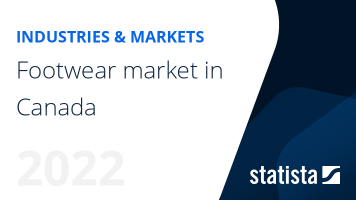 The most important key figures provide you with a compact summary of the topic of "Footwear in Canada" and take you straight to the corresponding statistics.