Activewear in the U.S. - statistics & facts

The activewear market, comprising of several product categories such as footwear, sportswear, swimwear, and yoga wear, has seen healthy growth over the last half-decade. The rising popularity of activewear in day-to-day life has blurred the lines of activewear and fashion, spawning a new category of apparel, called 'athleisure'. The coronavirus (COVID-19) pandemic is credited with accelerating this trend, as people became accustomed to wearing more comfortable clothes while in lockdown. Activewear itself, however, refers to clothing worn during exercise or specifically for physical activity. It is also known as sportswear or performance apparel.
In 2021, the size of the global activewear market was estimated to amount to approximately 366 billion U.S. dollars. By 2027, this figure was forecast to increase by almost 25 percent. Women’s activewear is one of the fastest growing segments of the activewear market and is forecast to increase by roughly 65 billion U.S. dollars over the same period.

Leading brands in the U.S.

Perhaps unsurprisingly for many, Nike was the largest sporting goods company worldwide by revenue in 2021. That year, Nike generated more than 44.5 billion U.S. dollars in revenue. This was followed by Adidas, whose revenue totaled approximately 24 billion U.S. dollars. In addition to this, Nike and Adidas have the largest market capitalization of any sportswear companies. They even out-perform other major apparel brands such as H&M in that respect. Nike is second only to LVMH in the market capitalization of all clothing companies worldwide. While these two companies dominate the activewear market, they are consistently challenged. In the United States alone, the net revenue of lululemon, a Canadian sports apparel brand, more than quadrupled between the years of 2013 and 2021.

State of the U.S. activewear market

The United States has the largest activewear market in the world. In 2021, the sports apparel market value in the U.S. was approximately 103 billion euros. However, 2020 was a difficult year for many industries, and the activewear industry was also affected. Although the revenue growth of the performance sports apparel market in the U.S. saw a decrease of more than six percent that year, 2021 saw significant growth. Even more growth is forecast in the years to come, although at a more moderate rate. The footwear market growth in the U.S. was expected to see similar trends, except with a peak in 2022.

According to a September 2021 survey, the generation that buys the most sportswear is the Millennial generation. Almost 60 percent of respondents born between 1980 and 1994 had bought sportswear in the previous 24 months. This would cover the period of the coronavirus pandemic, when many indoor activities were not possible, such as going to bars or the cinema, and people were spending a lot of time indoors due to lockdowns. Therefore many people turned to sport and exercise for fun and a reason to get out of the house, which may have driven activewear sales. The top considerations for consumers when buying sportswear were comfort, high quality, and a good fit.
This text provides general information. Statista assumes no liability for the information given being complete or correct. Due to varying update cycles, statistics can display more up-to-date data than referenced in the text.
P. Smith
Research expert covering apparel industry and general merchandise
Get in touch with us now
Published by P. Smith, May 13, 2022 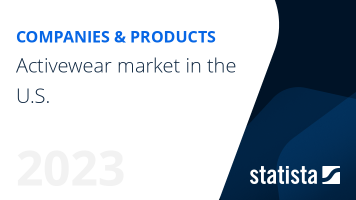 Go to report Activewear market in the U.S.
Top Seller

The most important key figures provide you with a compact summary of the topic of "Activewear in the U.S." and take you straight to the corresponding statistics.