As many industries did, the non-alcoholic beverage market saw a decline in 2020 due to the COVID-19 pandemic. Global revenue shrank eight percent to just over one trillion U.S. dollars but 2021 is expected to witness a turnaround. The United States represents the largest market in the world with 359 million U.S. dollars in revenue.

Water is, by far, the most consumed non-alcoholic beverage in the world. In 2020, over 450 billion liters of packaged water were consumed worldwide. In some parts of the world, packaged water is a necessity as the local water supply is not safe to drink. Even in parts of the world where local water is treated, many people drink bottled water for convenience or because they prefer the taste. It's not the water itself, but the minerals dissolved within it that impart the flavor. The United States had the highest per capita consumption of non-alcoholic drinks with Mexico only slightly behind. Much of Mexico's consumption comes from bottled water as it is the highest per capita consumer in the world.

In the following 5 chapters, you will quickly find the 29 most important statistics relating to "Non-alcoholic beverages worldwide". 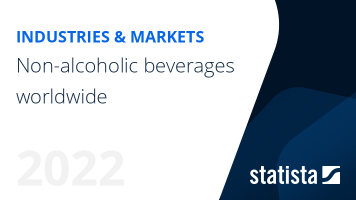 The most important key figures provide you with a compact summary of the topic of "Non-alcoholic beverages worldwide" and take you straight to the corresponding statistics.

Juice and smoothie market in the U.S.

Energy drinks in the United States