Employment in the IT industry - Statistics & Facts

The information technology (IT) industry encompasses various fields related to computers and digital information. As leading companies across industries push for further adoption of digital technologies, IT professionals have become some of the most in-demand members of today’s labor force. In 2021, programming languages such as Clojure and F# were associated with the highest IT salaries worldwide, ranging from 81 to 95 thousand U.S. dollars. By 2022, companies are planning to invest in remote and hybrid work setups to support their IT workforce better. Such measures vary from ensuring each employee is properly equipped with the necessary hardware to work from home to educating IT professionals and managers on the best practices for remote work. Consequently, for 2022, the IT workforce will need to keep up with the demand, especially IT skills. In this regard, HR professionals expect to struggle recruiting full-stack and back-end developers in 2022.

IT Employment in the U.S.

Employment in the IT sector in the U.S. has constantly been increasing over the past decade. After a severe drop in the IT workforce in June 2020, IT employment peaked in the U.S. at nearly three million people as of January 2022. Moreover, by 2030, U.S. tech employment is forecast to amount to six million people. When it comes to salaries, jobs in IT management were paid the most, with salaries exceeding 150 thousand U.S. dollars. At the same time, for software developers and cyber security engineers, average wages varied between 120 and 130 thousand U.S. dollars annually. It is hardly surprising that IT professionals earned the highest salaries in Silicon Valley. The region in Northern California is the global center of high tech and innovation, with some of the world’s largest companies having their headquarters there, such as: Apple, Electronics Arts, Amazon, Meta Platforms, Netflix, Tesla, Nvidia, or Twitter.

Diversity in the tech sector

It is hardly surprising that the tech sector has a long-standing problem concerning gender diversity and inclusion. Despite several improvements being made over the past years due to increased societal pressure, women are still not entering the tech job market at the same rate as men. In 2021, women’s representation in IT teams was at 21 percent, while cybersecurity teams were at only 12 percent. Notwithstanding countries having equal gender representation across their entire labor force, tech companies' discrepancies are more significant. For instance, while female representation in France’s total labor force is at 48 percent, this percentage drops to only 21 percent when applied to tech organizations. One of the most significant barriers for all women in the tech industry to be promoted is gender bias. Women of color face even more difficulties concerning racial bias. In 2021, 37 percent of women of color perceived the lack of trust in their abilities as a significant barrier to obtaining job promotions, as opposed to only seven percent of women experiencing this obstacle.
This text provides general information. Statista assumes no liability for the information given being complete or correct. Due to varying update cycles, statistics can display more up-to-date data than referenced in the text.

Number of cyber security professionals in the U.S.
1.14m

Special focus: IT employment in the U.S. 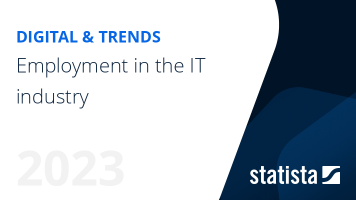 Go to report Employment in the IT industry
Top Seller

The most important key figures provide you with a compact summary of the topic of "Employment in the IT industry" and take you straight to the corresponding statistics.