Dairy is a significant part of the human diet across the world. It offers an abundance of nutrients in the form of calcium, minerals, and proteins. However, in India, the use of dairy goes far beyond fulfilling dietary and nutritional needs. Its importance is deep-seated in Hindu mythology. Hindus consider cows to be sacred embodiments of the goddess Kamdhenu. The Rigveda, one of India’s most ancient scripts written around 1,700 BC also mentions the use of milk and other dairy products in the Indian subcontinent. This, in part, has led India to be one of the leading producers and consumers of milk in the world.

India’s journey to the summit of the dairy market started in 1970 under the guidance of Dr. Verghese Kurien. ‘Operation Flood’ - a massive dairy development program, marked the beginning of India’s transformation from a milk deficient nation to its largest producer. Home to about 58 million milk cows, India produced more than 209 million metric tons of milk in the fiscal year 2021. Unsurprisingly, the country reared nearly thrice the number of milk cows than in the entire European Union that year. Moreover, Uttar Pradesh was the largest milk-producing state in India followed by Rajasthan and Madhya Pradesh.

Despite being an important contributor to the country’s economy, the Indian dairy industry is highly unorganized, fragmented, and lacks technological advancements. The unorganized sector consisted of traditional milkmen who sold raw or unprocessed milk to their customers and other vendors. The organized sector, on the other hand, consisted of various private cooperatives. Amul, the Indian dairy cooperative society was one of the leading brands worldwide with a brand value of 3.1 million U.S. dollars. Along with this Gujarat-based cooperative, Karnataka Milk Federation were the two most dominating players in the country.

Dairy products are the chief sources of protein for millions of Lacto-vegetarians in the country. An even larger part of the population who cannot afford meat rely heavily on dairy for their dietary protein demand. The overall domestic consumption of milk was over 203 million metric tons in 2022. In addition, the daily consumption of milk was equal among men and women. India offers a variety of dairy-based cuisines that are unique to its diverse culture. Paneer, a soft and non-melting kind of cottage cheese, is very popular in the North and used in several dishes. Milk and curd are also indispensable to the many popular Indian beverages including tea, coffee, and lassi.
This text provides general information. Statista assumes no liability for the information given being complete or correct. Due to varying update cycles, statistics can display more up-to-date data than referenced in the text.
Published by Statista Research Department, Sep 8, 2022 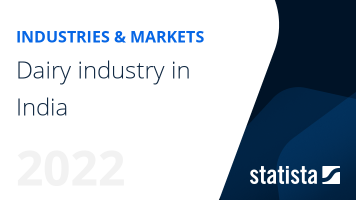 The most important key figures provide you with a compact summary of the topic of "Dairy industry in India" and take you straight to the corresponding statistics.